Development of a Framework to Estimate the Cost of Opioid Dependence

Dependence on heroin and on prescription and over-the-counter opioids can impose significant harms on the state, communities, families, patients and users.

Some of these possible harms are tangible—loss of life, poor health and the cost of healthcare and the criminal justice system. Others are less tangible, such as reduced quality of life and the psychological health of both users and their families.

Understanding the nature and size of these harms and where they fall is important for policymakers responding to opioid dependence. Assigning a monetary value to these harms, where possible, is one way in which they can be assigned a magnitude of importance, as well as help in assessing the relative effectiveness of programs aimed at assisting those affected by opioid dependence. This study identifies and assesses available estimates of the costs of opioid dependence.

RAND Europe was asked to independently assess available estimates (from the UK, other European countries and worldwide), identify possible gaps and develop a framework to generate more comprehensive and standardised cost estimates relevant for different dependence and treatment contexts taken from a truly societal perspective (which considers not just taxpayers or the government perspective, but also the lost quality of life of those suffering from dependence and their families/communities). The objectives were to:

To identify and review existing estimates, a rapid evidence assessment (REA) was undertaken. To ensure the collation of estimates that were comparable, strict criteria were applied to select studies for inclusion. Studies must:

Included estimates were assessed and adjusted to facilitate standardisation and quality determination. This allowed us to map what was estimated and how, and convert estimates into a standards currency of 2012 euros.

Knowledge about the harms of opioid dependence is limited and patchy.

A targeted review of the literature highlighted the kinds of harms stemming from opioid dependence, but there is considerable scope to improve the knowledge base in this area. The available evidence tends to focus on dependence on heroin, whereas relatively little is known about the challenges faced by those who are dependent on prescription or over-the-counter medicines containing opioids. Some harms—for example the rates of drug-related deaths—are much better understood than others (such as the effects on families and communities of opioid dependence).

Existing estimates vary in geography, type of opioid use and definition of dependence.

The estimates included vary widely, in terms of their geographic spread, populations studied, methodological approach and the data on which they are based. The main similarity between the estimates is that they focus on estimating costs of healthcare, criminal justice and lost productivity costs.

Welfare and intangible costs are not well estimated but appear significant.

Only one included study estimated social welfare costs and none looked at intangible costs. Thus the included estimates omit several of the possible harms of opioid dependence. It is likely, therefore, that they are underestimates.

Costs to those who are dependent, their families and communities are not well estimated.

All the included estimates take a government or taxpayer perspective, thus not including costs borne by the dependent individual, his or her friends, family and community (such as quality of life or well-being). Total costs of opioid dependence were highly varied, ranging from €2,627 to €60,665 per person, per year.

It is not possible to select any one estimate as more accurate or useful. In addition, it was not the case that estimates that included more kinds of costs were higher in value. We suggest that the drivers of the size of these estimates lie in the methodological approach—including data sources and assumptions, etc. For studies to be truly comparable, they must share the same methods, which these do not.

We propose a framework that can be used as a tool for calculating the costs of different types of opioid dependence in different contexts.

This framework sets out eight steps to guide decisions about cost estimation. The framework is intended to lead to estimates that:

Proposed Framework to Guide Estimation of the Costs of Opioid Dependence 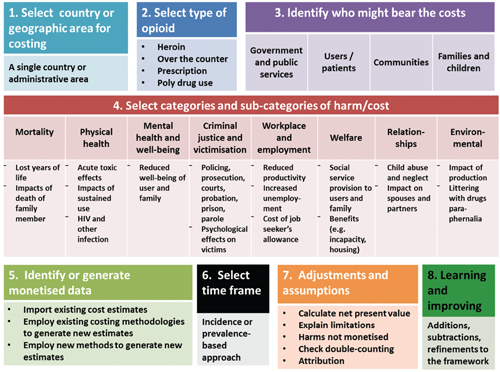 Advisory Council on the Misuse of Drugs, Consideration of the Use of Multi-Criteria Decision Analysis in Drug Harm Decision Making, 2010. As of October 8, 2013:
https://www.gov.uk/government/uploads/system/uploads/attachment_data/file/119154/ACMD-multi-criteria-report.pdf

The project described in this article was prepared for Reckitt Benckiser Pharmaceuticals and conducted by RAND Europe.