Israel was one of the most vocal opponents of the nuclear negotiations with Iran. Yet, after years of Israel making the Iran nuclear file its top national security priority and months of debate that tested the U.S.-Israeli relationship, once the agreement became a reality, the nuclear issue moved off the radar in Israel's political and public discourse. Israel's attention turned to nonnuclear challenges, particularly Iran's growing role in Syria. 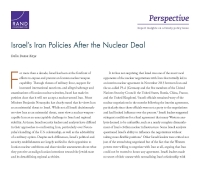 For more than a decade, Israel has been at the forefront of efforts to expose and prevent a potential Iranian nuclear weapon capability. It is thus not surprising that Israel was one of the most vocal opponents of the nuclear negotiations with Iran that led to a final agreement in July 2015. Despite some positive assessments in Israel's security community about the value of rolling back the Iranian nuclear program for a number of years, the overwhelming majority of political and security leaders in Israel remained highly skeptical of the deal and Iran's broader regional intentions. Yet, remarkably, after years of Israel making the Iran nuclear file its top national security priority and months of contentious debate that severely tested the U.S.–Israeli relationship, once the agreement became a reality, the nuclear issue quickly moved off the radar in Israel's political and public discourse. To be sure, concerns about Iran did not vanish; they just evolved from a focus on the nuclear issue to Iran's ability to threaten Israel in nonnuclear spheres, particularly through its support for Hizballah and its growing presence in Syria, on Israel's northern border. Israel's views of Iran will no doubt continue to evolve as the Iran nuclear agreement is fully implemented, flounders, or ultimately unravels. But Israel's response following the agreement and preparations for the future already signal likely Israeli postures in the years to come, as well as potential flash points that could threaten regional stability and U.S. national security interests.

The Official Israeli Response to the Final Nuclear Agreement Was Hostile

This research was conducted within the RAND Center for Middle East Public Policy (CMEPP), part of International Programs at the RAND Corporation.