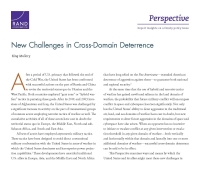 This Perspective places deterrence within the broader spectrum of influence strategies available to international actors. It focuses on the domains of space and cyberspace and on two subareas of the land domain of warfare: hybrid warfare and terrorism. Potential in-domain and cross-domain strategies of deterrence by denial or by threat of punishment are suggested for each focus area. The author concludes that establishing effective deterrence against attacks in space and against the use of hybrid warfare tactics are the two most urgent priorities. Legislative action, demonstrative exercises, collective security agreements, retaliatory strikes against opponent systems, and creating a visible ability to hold adversary systems of political control at risk are recommended as remedial steps in the space domain. Enhanced abilities to interdict "troll armies," conduct information operations, identify the national origin of combatants, respond collectively, and deploy military quick reaction forces to neighboring states by prior agreement with them are suggested as remedial steps for hybrid warfare. The Perspective outlines criteria by which to prioritize between strategies of deterrence: denial over punishment, nonescalatory strategies over escalatory ones, and reversible strategies over irreversible ones. Even when limited to deterring terrorism and war with China and Russia, implementing a doctrine of cross-domain deterrence would be complex and would have significant resource implications. Political capital would need to be spent to achieve allied consensus and international political support for the strategy, and agencies stood down at the end of the Cold War might need to be reestablished.

This research was sponsored by the Office of the Secretary of Defense and conducted within the International Security and Defense Policy Center of the RAND National Defense Research Institute, a federally funded research and development center (FFRDC).