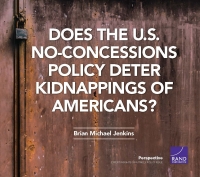 Does the U.S. No-Concessions Policy Deter Kidnappings of Americans?

The question of whether the United States should ever pay ransom to terrorists holding hostages is a persistent one. Should government save the lives of hostages even if it risks encouraging further hostage-taking and may put more people at peril in the future? Or must a few be sacrificed now in order to protect many others in the future? Moral arguments can be mustered on both sides, but it is important to consider the historical evidence about the presumptions on which policies are based.

For decades, the United States has declared a policy of not paying ransom to terrorists holding Americans hostage. Deterrence is offered as the principal reason for the U.S. adherence to a no-concessions policy, but whether empirical evidence supports that position remains a question. The RAND Corporation initiated its research on terrorism in 1972, including how best to deal with hostage incidents. This paper examines the trajectory of kidnappings and hostage-takings dating back to that time and discusses what research at the time suggested. More-recent studies offer contradicting results: Some studies challenge the deterrent value of the no-ransom policy but suggest that such a policy adversely affects the fate of the hostages, and one study suggests that U.S. ransom payments would have prompted more kidnappings.

This project is a RAND Venture. Funding for this venture was provided by philanthropic contributions from RAND supporters and income from operations. The research was conducted by the RAND National Security Research Division.