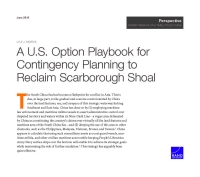 Scarborough Shoal is a small, high-tide feature about 140 miles west of the Philippines, yet it represents one of the most consequential fault lines of Chinese territorial aggression in the South China Sea. In addition to being important for Philippine fishing and marine ecology, Scarborough Shoal is of major symbolic importance for the United States and its treaty ally, the Philippines. If China were to dredge the feature and build dual-use military facilities there, as it has done with several other features in the South China Sea, that would have major implications for peace and stability in the region and would put U.S. troops and Philippine territory at risk in a conflict with China. In this paper, the author proposes a graduated menu of response options for the United States to consider in the event that China undertakes irreversible actions to alter the status quo of Scarborough Shoal. In particular, the author considers three sets of response options—pre-crisis, during-crisis, and long-term responses—that the United States can take to significantly mitigate the possibility of China taking this step or, if deterrence fails, to impose costs that may prevent Chinese leaders from contemplating such actions in the future. This paper is partly informed by ongoing RAND Corporation work on gray zone challenges in Asia.

This project is a RAND Venture. Funding was provided by gifts from RAND supporters and income from operations. The research was conducted within the RAND National Security Research Division (NSRD) of the RAND Corporation.