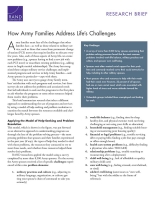 Army families must face all the challenges that other families face — as well as those related to military service, such as those that come from permanent change of station (PCS) moves that require families to relocate every few years. Also, each of these aspects of Army life can create new problems (e.g., spouses having to find a new job with each PCS move) or exacerbate existing problems (e.g., adding stress to fragile marital relationships). The Army has recognized these unique military service challenges and implemented programs and services to help Army families — and Army spouses in particular — cope with them.

The Army uses surveys to gauge Army family members' satisfaction with such programs and services, but these surveys do not address the problems and associated needs that led individuals to seek out the programs in the first place or ask whether the programs or some other resources helped them resolve their problems.

This brief summarizes research that takes a different approach to understanding the use of programs and services by using a model of help-seeking and problem resolution to examine the match between the resources available and challenges faced by Army spouses.

Applying the Model of Help-Seeking and Problem Resolution

This model, which is shown in the figure, was put forward as an alternative approach to understanding program use through the lens of the problem-solving process — the most pressing problems that spouses and their families experienced in the past year (if any), the types of help they needed to deal with those problems, the resources they contacted to try to meet those needs, and whether those resources helped them resolve their problems.

RAND researchers applied the model using a survey completed by more than 8,500 Army spouses. On the survey, the Army spouses received a list of specific challenges experienced within nine problem domains:

For each of their top two problems, the respondent was asked to indicate what types of help — needs, if any — they required to deal with the specific problems in that domain. Needs included, for example, social or emotional support, general or specific information, or an advocate. If respondents chose more than two needs for a problem, they were asked to prioritize two types of needs.

For the top two needs identified by respondents, they were asked to indicate which resources, if any, they had "used or tried to use to meet [the] need." This included military resources — e.g., the spouse's chain of command (squad leaders, noncommissioned officers, or officers) or the Army Family Readiness Group (FRG) — and nonmilitary resources — e.g., other military spouses or internet resources (such as WebMD or Google). All participants were also asked more-general questions about their perceptions of military resources and barriers to using them.

Finally, respondents were asked about three specific outcomes — perceived stress, general attitudes toward the Army, and support for the soldier spouse remaining in the Army.

What the Authors Found Using the Problem-Solving Process

The table highlights both the general findings from using the process and those specific to the characteristics examined.

Based on the findings in the table, the authors recommend that the Army take the following actions: