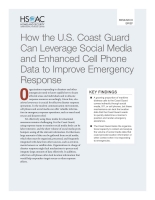 Organizations responding to disasters and other emergencies need to know rapidly how to locate affected areas and individuals and to allocate response resources accordingly. Given this, situational awareness is crucial for effective disaster response operations. In the modern communication environment, cell phones and social media can offer valuable information in emergency response operations, such as search and rescue and disaster relief.

Yet effectively using these media for situational awareness remains challenging. For the Coast Guard, using response teams to monitor social media feeds can be labor-intensive, and the sheer volume of social media posts hampers seeing all the relevant information. Furthermore, large amounts of data can be gathered from social media, which then must be organized, processed, and frequently integrated with data from other sources, such as environmental sensors or satellite data. Organizations in charge of disaster response might lack mechanisms to process and integrate large amounts of data effectively. In addition, calls from cell phones often lack location information that would help responders target rescue or other response efforts.

Using several types of analyses, the HSOAC team found that the use of social media to place distress calls in disasters and other emergencies is growing. During several hurricanes in 2017, for example, social media were, in some instances, the only way for survivors to request assistance. The Coast Guard established a call center based in Washington, D.C., to monitor tagged social media requests. Requests that arrived via social media and by phone were triaged by urgency of need and validated, when possible, before being routed to operations centers in Texas. The Coast Guard, although it requested that people call 911 instead of posting on social media, also set up impromptu capabilities to handle social media calls for help.

For decades, the Coast Guard has monitored communication channels on radio frequencies for distress calls from boaters. These calls provide location information that can be used to find mariners in distress. But a growing proportion of maritime distress calls from boaters come to the Coast Guard through cell phones, indirectly from 911 calls, or through social media. These channels might lack location information, and the Coast Guard has limited awareness of overwater cell phone coverage. The authors also found that deaths occur disproportionately in the area closest to shore. In light of the fact that boaters are using their cell phones to call for aid, enhancing the Coast Guard’s ability to use this method of communication to locate boaters could provide opportunities to reduce fatalities. (The figure shows search-and-rescue cases along Florida's coast in 2018 by notification type and by fatality status.)

Finally, the Coast Guard does not possess the organizational capacity to collect and analyze social media information that could be helpful in responding to emergencies. This shortfall includes both computing capacity—such as a way to aggregate and analyze imagery patterns during a crisis—and human capacity to process the information.

To address these issues, the HSOAC team recommended the following steps: