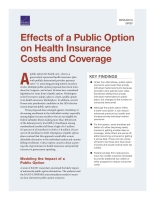 Effects of a Public Option on Health Insurance Costs and Coverage

A public option for health care—that is, a government-sponsored health insurance plan with publicly determined provider payment rates—is attracting growing interest in policy circles. Multiple public option proposals have been introduced in Congress, and at least 18 states have considered legislation for some form of public option. Washington is the first state to adopt a plan to create a public option in its health insurance Marketplace. In addition, several Democratic presidential candidates in the 2020 election season proposed public option plans.

These proposals have emerged against a backdrop of decreasing enrollment in the individual market, especially among higher-income enrollees who are not eligible for federal subsidies (those making more than 400 percent of the federal poverty level [FPL]). Enrollment among unsubsidized enrollees fell from a high of 6.3 million (43 percent of all enrollees) in 2016 to 3.8 million (31 percent of all enrollees) in 2018. Champions of public option plans contend that this approach would offer a more affordable alternative in the individual market and counter falling enrollment. Critics express concerns about a growing role of government in health insurance and potential increases in government spending.

Modeling the Impact of a Public Option

The researchers estimated the effects of these alternatives on individual market premiums, enrollment, federal government spending, and affordability of coverage for the year 2022. A key assumption for this analysis is that providers would accept lower rates.

Public Option Premiums Were Lower, but Changes to the Total Number of Uninsured Were Small

Across all four scenarios, the analysis showed that average public option premiums were lower than other "private" individual market premiums (Figure 1). Most of the difference stemmed from lower provider payment rates. In addition, the analysis assumed that sicker and more expensive enrollees would have greater preference for private plans, because of concerns about provider access in the public option. As a result, private individual market premiums increased in some scenarios, even after accounting for risk adjustment and downward pressure on private premiums due to competition with the public option.

Consistent with the lower premiums, more individual market enrollees switched from private to public plans. Under all four scenarios, enrollment in public option plans was substantially higher than in the private plans (Figure 2).

In all scenarios, federal spending on tax credits fell with the introduction of the public option, with savings ranging from $7 billion to $24 billion (Figure 3). The reduction in federal spending was driven by changes in the benchmark premium used to set tax credit amounts. Scenarios 2, 3, and 4 assumed that the public silver option, which pays lower rates, would become the benchmark plan. The benchmark premium also fell in Scenario 1, because of downward pressure from competition and dynamics with cost-sharing reduction costs loaded onto public and private silver premiums. In Scenario 4, the federal savings were smaller because the cost of extending tax credits to people with incomes between 400 and 500 percent of FPL is included in the federal spending amount.

There Were Winners and Losers

The public option offers a lower-cost option for enrollees; at the same time, it can reduce tax credits and increase private individual market premiums. These changes mean that some enrollees fare better under a public option, while others fare worse. Across the four scenarios, an estimated 5.1 to 12.1 million people would be better off, either becoming newly insured or paying less for equivalent or better coverage than they currently have. Conversely, an estimated 2.2 to 6.8 million people would be worse off, either becoming uninsured or paying more for equivalent or worse coverage. Those who would be worse off tend to be people with incomes below 400 percent of the FPL who would receive lower tax credits because of the public option lowering the benchmark premium (Figure 4).