A Decade of Welfare Reform

What We’ve Learned About Child Well-Being

What We've Learned About Child Well-Being

The past decade has seen a number of changes in welfare policy, starting with state waivers under the Aid to Families with Dependent Children program and culminating in the Temporary Assistance for Needy Families (TANF) block grant implemented by the Personal Responsibility and Work Opportunity Reconciliation Act of 1996 (PRWORA). These reforms produced changes in the structure of benefits, introduced time limits, strengthened requirements for mandatory participation in work-related activities, and changed various administrative procedures.

Part of the debate that preceded PRWORA focused on the potential impact of TANF for child well-being. Some observers felt that increased work by welfare-reliant mothers would be harmful to children. A related concern was that the loss of welfare payments might further increase child poverty, again with negative consequences for children. Others suggested increased earnings from work would more than offset lower welfare payments and argued that increased work would provide a positive role model for disadvantaged children and youth. Promoting marriage and family stability was also viewed as beneficial.

To understand how welfare policies affect welfare-related outcomes, RAND Labor and Population program staff synthesized the current state of knowledge in this area. This synthesis showed that welfare reform can have both positive and negative effects on children and that the effects may vary with the age of the child. The most favorable effects are associated with financial work incentives, most likely because income increases from combining work and welfare. Work requirements do not appear to have strong favorable or unfavorable impacts on children. However, both policies are associated with unfavorable outcomes for adolescents. Little is known about how time limits and sanctions affect child outcomes. There is also relatively little evidence on which to draw solid conclusions about the impact of welfare reform as a whole on child well-being.

How Was The Synthesis Conducted?

These findings resulted from a synthesis that aimed to answer the question: What is the effect of a given policy (e.g., work-related activity requirements) on a given outcome (e.g., child behavioral problems), holding all else equal? If all else is not held equal, then confounding influences can yield misleading results. The selected studies come from two research strategies that attempt to deal with such "confounders": random assignment (34 studies) and econometric methods using observational data (33 studies).

Conceptually, the synthesis was organized around a two-dimensional matrix, where the rows represent individual welfare policies and the columns represent outcomes of interest. Filling in the matrix itself was not straightforward. Ideally, each cell would be filled in, expressing in a common format how each policy affected each outcome based on a review of the research literature. In reality, the literature does not cover each cell, and the studies included in some of the cells cannot be relied on for policy purposes—typically because findings are not statistically significant.

Filling in the cells required more than simply tallying the results. Rather, the findings for each analysis were weighed and the strength of evidence for each policy-outcome pair was assessed. In this approach, the synthesis assigns a qualitative summary of the direction of the effect of each policy on each outcome and an indicator of the depth of the knowledge base associated with that effect.

What Does The Synthesis Tell Us About Child Well-Being?

The matrix below shows the effect of various welfare policies and TANF as a bundle on the outcome of interest here—child well-being. We also show the results for family income, a potential pathway by which welfare reform may affect child outcomes. 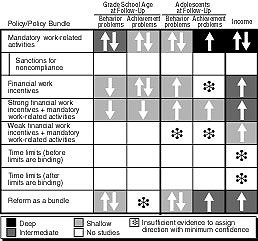 The overarching conclusion is that the knowledge base is limited. The child well-being category was divided into child abuse and neglect and into behavioral, school achievement, and health problems for three age groups of children at the time of follow-up for the studies: preschool age, grade school age, and adolescents. Only 25 of the 67 studies examined at least one of these child outcomes and all but one used the random assignment methodology. Our knowledge about the effects on child abuse and neglect, on preschool-age children, and on health problems across the age groups is more limited and thus is not included in the matrix. In terms of policies, we know virtually nothing about the effects of sanctions and time limits on child outcomes.

What knowledge we have points to evidence of both positive and negative effects. Work requirements do not appear to have strong impacts on grade school-age children, although there is evidence of unfavorable impacts for adolescents, especially in school performance (shown as an increase in achievement problems). Reductions in behavior and school problems (denoted by downward-pointing arrows) are limited to financial work incentives, either implemented alone or in combination with work requirements, but only for grade school-age children. This policy is also associated with increases in family income (denoted by upward-pointing arrows), which is a likely contributor to this favorable impact. But even for this policy, there is evidence of unfavorable impacts for adolescents.

The limited evidence on the effect of welfare reform as a bundle suggests a mixed impact on behavior problems of young children and adolescents and an increase in school achievement problems for adolescents. However, these results should be interpreted cautiously, since they are based on two random assignment studies with reforms not very representative of those implemented in other states.

In sum, the evidence suggests the impacts of reforms differ with the stage of a child's development. Countervailing forces seem to both promote and diminish a child's healthy behavioral, social, cognitive, and physical development. The resulting impacts of welfare reform policies on child outcomes are likely to depend on the strength of the opposing forces and on the child's stage of development and other circumstances.

A nearly universal limitation of our conclusions is that they apply mostly in the short run. Understanding the longer-term impacts of reform is especially relevant for child outcomes. Although some aspects of a child's well-being, such as behavior problems, may change quickly with changes in the parent's behavior, other aspects, such as cognitive skills, are likely to take much longer to change. Furthermore, even effects in the short term may change as children are exposed to cumulatively lower levels of welfare use, higher levels of parental employment, and higher or lower levels of total household income. Thus, long-run information on the effects of current policies on child well-being—where the impacts may vary over time or with the stage of child development—is crucial.