The Evolution of the All-Volunteer Force

The movement from conscription to an all-volunteer force (AVF) was a contentious issue when it was proposed in the 1960s. However, concerns about relying on volunteers to maintain a professional military at required levels have proven to be unfounded. As this study demonstrates, a 40-year partnership between policymakers and the research community has produced not only the finest fighting force the United States has ever had but also one that is broadly representative of the American people.

In 1969, four years before the United States eliminated the draft and moved to an all-volunteer force, a member of the President’s Commission on an All-Volunteer Armed Force wrote to its chairman that “while there is a reasonable possibility that a peacetime armed force could be entirely voluntary, I am certain that an armed force involved in a major conflict could not be voluntary.”[1] So far, his reservations have not been borne out. However, given the ongoing war in Iraq — with casualties rising, enlistments dropping, and a majority of the American public no longer believing that the war is worth fighting — the issue of recruiting enough volunteers to maintain the U.S. military at required levels is again relevant.

I Want You! The Evolution of the All-Volunteer Force provides a richly detailed history that begins in the 1960s, when the credibility of the draft was called into serious question, and ends in the present, when long overseas deployments and the deteriorating situation in Iraq may adversely affect the sustainability of the all-volunteer system. The author, Bernard Rostker, is a senior RAND fellow with four decades of experience as both a policy analyst and policymaker in the area of defense manpower. Drawing on a vast archive of U.S. government materials, including many recently declassified documents, he addresses the complexities of the subject by alternating chapters that describe the key historical and political events of each period with corresponding chapters that focus on the research that has been used to inform the decisionmaking process.

In the foreword to this book, former Secretary of Defense Melvin Laird observes that “the work constitutes a virtual archive of the many events, issues, facets, and fundamentals constituting the all-volunteer force. The research and documentation exceed by far, in my judgment, any prior attempts to explore this subject.” Thus, it is an extremely valuable resource for scholars and students of military affairs and public administration.

Why Did the United States Move to an All-Volunteer Force (AVF)?

Although the country had conscripted its armed forces for only 35 of its 228 years — nearly all in the 20th century — the American people were generally willing to accept this practice when service was perceived as universal. However, in the 1960s, that acceptance began to erode. There were five major reasons:

These views were reinforced by the findings of the Gates Commission, set up in 1969 by President Richard Nixon to advise him on establishing an all-volunteer force. The commission addressed key military-manpower issues, including supply and demand, attrition and retention, and the mix of career and noncareer members in the context of management efficiency and personal equity. It concluded that the nation’s interests would be better served by an all-volunteer force than by a combination of volunteers and conscripts. In 1971, President Nixon signed a new law to end the draft and put the selective service structure on standby. After a two-year extension of induction authority, the end of the draft was formally announced in January 1973.

Effective Use of Research Has Been Instrumental in Establishing the AVF 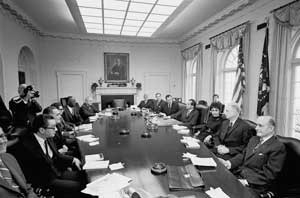 The President’s Commission on an All-Volunteer Force (the Gates Commission) meeting with President Nixon in the Cabinet Room on Saturday, February 21, 1970.

Since 1964, personnel managers have used research to help develop, implement, and sustain the AVF. The research has been policy relevant, and the mixture of different disciplines — economics, psychology, social psychology, and sociology — produced a comprehensive and credible assessment of alternative policies.

The research of the 1960s and early 1970s reassured decisionmakers that an AVF might be possible at acceptable budget outlays. In the 1970s and 1980s, various test programs demonstrated the value of advertising and the benefits of educational incentives and bonuses in encouraging enlistment. Analytical evidence supported the need to reform the compensation system. Studies of accession testing and job performance proved what now seems so logical but was once very controversial: People who score higher on standardized tests do better on the job than those who score lower. The resulting emphasis on quality attracted capable people and led to increasing professionalism within the military services. A largely unexpected consequence of moving to a professional military with better pay was the higher rate of reenlistment and a sharp increase in the size of the career force.

Since the fall of the Soviet Union in 1989 and the disappearance of the threat that had dominated national security strategy for half a century, personnel research has helped managers make the adjustments that were needed to transition the larger post–Cold War military to a smaller, more-agile, and more-engaged force.

The AVF Has Changed the Military for the Better

Since the establishment of the AVF, the quality of the force, measured by scores on standardized IQ tests, has improved. The percentage of new recruits with high school diplomas has increased. The AVF has dramatically increased the number of career personnel and increased the proficiency and professionalism of the force.

The AVF is also broadly representative of the American people. For the past 26 years, the Department of Defense has annually reported on social representation in the U.S. military. The 2004 report noted the following:

The Success of the AVF Depends on Four Factors

Reflecting on 30 years’ experience with the AVF suggests four broad reasons for its success. The first is attention and leadership from top management. The AVF would not have come about when it did without the leadership of President Nixon. Within weeks of taking office in 1969, he began the planning process and announced the formation of the Gates Commission. Secretary of Defense Melvin Laird (under Nixon) and Secretary of Defense Caspar Weinberger (in the early 1980s, under President Ronald Reagan) were likewise among the senior government officials who provided strong support for the AVF. Turning to the military, Army General Maxwell Thurman is considered by many as the single most important person in the history of the AVF because he taught the Pentagon how to recruit and, by dint of personality and intellect, made the AVF concept work throughout the 1980s.

A second contributing factor is the use of quantitative analysis to test, adjust, and evaluate AVF policies. Well-designed, policy-relevant research to measure job performance and determine the optimum mix of quality and cost has resulted in the proficient and committed AVF that now serves the nation.

A DVD accompanying the book’s expanded edition contains more than 2,300 primary-source documents, including thousands of pages of government memoranda, letters, staff papers, and reports. More than 1,700 of these documents are linked from citations in the electronic version of the book, allowing readers to view the actual correspondence between government officials at the highest levels in context. The DVD includes material recently declassified to support this project, memoranda between presidents and secretaries of defense, commission and staff reports, and even video. This rich legacy of documentation about the all-volunteer force provides a fascinating, behind-the-scenes look at Pentagon and White House decisionmaking.

Third is the need to develop programs for attracting the necessary type and number of recruits. The AVF’s focus on quality has already been discussed here. To attract high-quality youths, the services had to develop appropriate marketing strategies and advertising programs that explained the benefits and opportunities of military service. The military learned that it had to offer money for education, bonuses to enlist in certain occupations, and enlistment tours of different lengths. It needed to develop career opportunities that had civilian relevance and were a good preparation for adulthood. The services also had to develop a professional, highly trained, and motivated recruiting staff. Finally, reenlisting the most capable members was the key to creating a truly outstanding force. Besides good pay, careerists demanded quality-of-life benefits such as good housing, child care, health benefits, family advocacy programs, and military stores. It was crucial that the services become “family friendly.”

The fourth factor is adequate financial resources. The defense budget must be large enough to support pay raises that keep pace with both inflation and civilian-sector pay increases; to provide resources for advertising, recruiters, bonuses, and educational benefits; and to fund the military retirement program and quality-of-life initiatives.

What Does the Future Hold for the AVF?

Today, with nearly 160,000 troops engaged in Iraq and Afghanistan, the AVF is being tested again. Military commanders continually point to the outstanding job the force is doing in this nontraditional military conflict. Remarkably, while enlistments have fallen off, retention remains at historically high levels. There were initial fears that soldiers would not reenlist if they had to redeploy even once into combat zones. However, the Army reports that some soldiers are now completing their third and fourth tours. Through improved pay and benefits for the military, America has demonstrated that it values an AVF. Our troops have likewise demonstrated their commitment through their willingness to serve.

A final judgment on the AVF has not yet been made. Indeed, it will always be a work in progress. However, the past 30 years — and particularly the experience in Iraq and Afghanistan — demonstrate that an AVF can be sustained during both peace and war. The dual challenges of longer periods of conflict and recurring deployments are formidable. There are no guarantees of permanent success. But, so far, the AVF has proven to be a resilient institution.