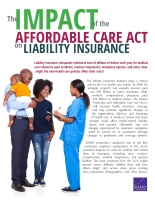 The Impact of the Affordable Care Act on Liability Insurance

The liability insurance industry plays a critical role in the U.S. health care system. In 2008, for example, property and casualty insurers paid out $30 billion in injury payments, while workers' compensation programs paid $29 billion in medical claims. The Patient Protection and Affordable Care Act (ACA) will increase health insurance coverage and may promote significant changes in the organization, delivery, and financing of health care. It stands to reason that these changes could affect health-related liability claims and payouts. Ultimately, any cost changes experienced by insurance companies could be passed on to consumers through changes in premiums and coverage options. 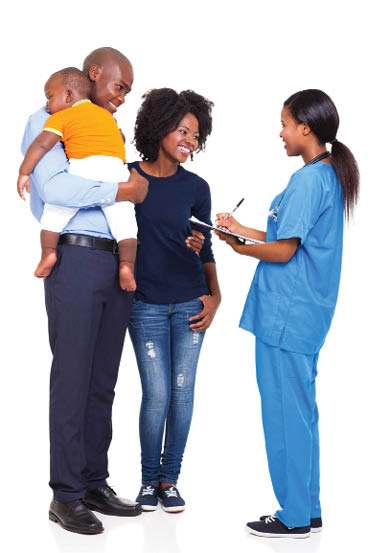 RAND researchers conducted one of the first systematic empirical explorations of the ACA's potential impacts on costs for liability and related lines of insurance, including auto, workers' compensation, medical malpractice, and general liability. The team examined how the ACA might operate across different liability lines and how effects might vary across states given existing laws, population demographics, and other factors.

The ACA is unlikely to dramatically affect liability costs in the long term.

Although there is considerable uncertainty surrounding these estimates, as of now, the best available evidence suggests that impacts arising through these five channels will be modest. The table below summarizes the estimated range of effects across states by market as of 2016, when the ACA is expected to be in full force. Most expected impacts are relatively small in percentage terms because they are relevant for only a fraction of the U.S. population (those gaining insurance coverage) or because the underlying behavioral changes from the ACA are relatively small (e.g., shifts in provider fees). The full research report has more-detailed information for each line and state.

NOTE: Percentages are rounded to the nearest 0.1%, and dollar figures are rounded to the nearest $10 million. These figures are estimates with a wide degree of uncertainty that is impossible to quantify and do not necessarily imply the level of precision to which they are reported. The ranges reported represent the states with the largest and the smallest percentage effect. n/a = not applicable.

Effects of the ACA May Develop Through Five Main Channels

The law could affect liability and related lines of insurance in five main ways.

Longer-Run Effects of the ACA Could Be Larger, but Are More Uncertain

To effectively navigate the future, liability insurers and policymakers will need to continue to monitor ACA implementation and trends.

There may be new pricing schemes for medical services.

The ACA includes various provisions designed to foster the spread of accountable care organizations (ACOs), groups of providers who associate in order to provide the complete spectrum of care for a given patient population. Because the ACO model of care is relatively new, many questions remain regarding how ACOs will integrate with liability insurers. More generally, the rise of ACOs could encourage a shift toward global payment models that affect how medical services are priced for insurers.

Medicaid may seek a bigger piece of the liability pie.

The increase in the share of the population covered through Medicaid and shifts over time in the fraction of Medicaid costs borne by states could lead states to look for cost savings in Medicaid. In recent years, Medicare has sought to save money by more aggressively pursuing subrogation, against liability awards, and Medicaid might follow suit.

People may be healthier and live longer.

Health care expansion could improve more people's chances of living healthier and longer lives. Liability insurers could see a decrease in costs because healthier people generally require less care in recovering from an injury. On the other hand, an increase in longevity could increase costs for some lines. An increase in the percentage of drivers who are over age 70, for example, might raise auto insurers' costs.