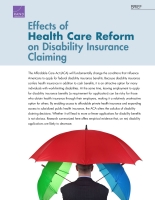 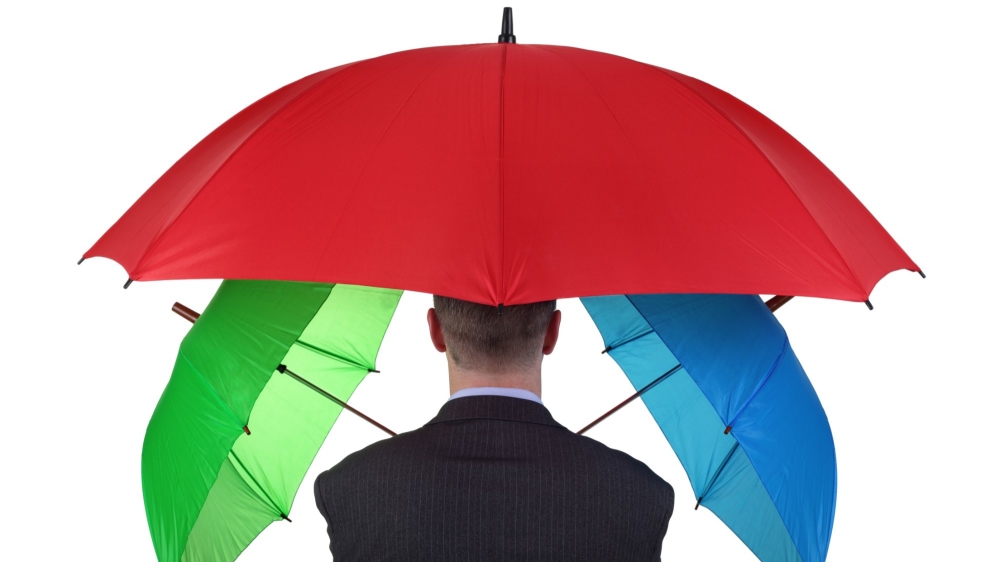 There is great interest in this issue because the numbers of disability beneficiaries have swelled in recent years relative to the number of workers paying into the system, leading the Board of Trustees of the Federal Disability Insurance Trust Fund to predict that the system will run out of funds by 2016.

It is too soon, of course, to know what the actual effects of national health reform will be on disability applications. But a recent RAND study has examined data from Massachusetts, which implemented reforms in 2006 that share the key features of the ACA, including creation of an insurance exchange as a source of lower-cost individual coverage and expansion of Medicaid (subsidized coverage for low-income individuals). Using administrative data from the Social Security Administration (SSA), the researchers analyzed changes in application rates for the two federal disability insurance programs — Supplemental Security Insurance (SSI) and Social Security Disability Insurance (SSDI) — in Massachusetts before and after the reform, statewide and by county, and compared changes to those in neighboring states and counties.

We summarize what the researchers expected to find in the data, what they actually found, and the implications of their results for national health reform.

The researchers hypothesized that the reform would have different effects on applications for SSI and SSDI because of fundamental differences in the features of the two disability insurance programs.[1]

The SSI program pays cash benefits to disabled individuals who have limited income and resources. It is important to note that it also offers Medicaid insurance coverage. Massachusetts's health reform, like the ACA, provides this population with another alternative: health insurance that does not depend on qualifying for disability insurance. For this reason, the researchers expected SSI applications to decline. This decline was expected to be especially pronounced in counties where a higher proportion of the population was uninsured before the reform.

The SSDI program, by contrast, is a contributory social insurance program financed by a payroll tax that provides cash benefits and access to Medicare to disabled people with sufficient recent work history. Although the relative value of obtaining health insurance through SSDI will also decline, similar to SSI (explained above), the SSDI program has two additional features that make it more complicated to analyze than the SSI program.

Waiting Period for Health Insurance. In contrast to SSI, SSDI requires a 29-month period from the onset of the disability to the determination of eligibility, where "onset" is defined by SSA as the intersection of two events: occurrence of a qualifying health condition and cessation of meaningful work. This means that workers who have a health condition that limits their ability to work face a difficult dilemma (often referred to as "employment lock"): They can either attempt to keep working in spite of their impairment to maintain health insurance from their employer or they can stop working to apply for SSDI and risk an extended period of time without insurance. Because the reform provides affordable health insurance coverage outside employment, workers with disabilities may no longer feel the need to continue at their jobs to keep their health insurance, since they can now obtain health insurance during the 29-month waiting period for Medicare.

Federal Funding. Unlike Medicaid, which receives significant funding from the state, Medicare is funded strictly by the federal government. Because Massachusetts had to absorb an increase in the number of Medicaid enrollees as health care reform was implemented, the state had an incentive to encourage low-income residents who might have been eligible for state Medicaid to apply for the federal SSDI program to offset these state costs.

The researchers also expected that any increase in SSDI applications would probably taper off in future years. They hypothesized that "pent-up demand" for disability insurance would exist among qualified workers not willing to leave their jobs if it meant losing health insurance for 29 months. Also, if the state encouraged qualifying individuals to move to SSDI, this effect is likely to be concentrated in the early years of the reform.

The analysis largely corroborated these hypotheses. Overall, the researchers found that total disability applications (for both SSI and SSDI combined) increased slightly after Massachusetts instituted health reform, compared with neighboring states. But the breakdown of effects by program and by county revealed telling differences, as shown in the figure.

SSI applications decreased in Massachusetts overall, although this difference was not statistically significant. When researchers examined trends by county, they found that the counties with the most uninsured residents before the reform (defined as lower than 88 percent insured — the population-weighted median in Massachusetts before the reform) showed a 6.4 percent decrease in SSI applications compared with neighboring counties. This is consistent with the hypothesis that, because the reforms increased access to Medicaid, disabled residents who were previously uninsured chose to obtain health insurance through other channels rather than apply for disability insurance.

SSDI applications rose by 5 percent in counties with a higher proportion of residents with health insurance coverage before the reform. At the same time, average time between disability onset and filing for SSDI benefits decreased by 1–2 months following the reform in these counties. This suggests that the new SSDI applications came from people who were employed just before they submitted their applications. Together, these two pieces of evidence are consistent with the hypothesis that the reform facilitated SSDI application among disabled workers because they no longer needed to stay employed to keep their health insurance.

SSDI applications also increased in counties with lower levels of health insurance, although these appear to have come from previously unemployed individuals

SSDI applications also rose (by 6 percent) in counties with a higher proportion of residents without health insurance coverage before the reform. However, in these counties, the average time between qualifying and filing for SSDI benefits increased by 0.5–1 month following the reform. This is consistent with the hypothesis that counties facing large Medicaid expansions may have encouraged new SSDI applications among long-term unemployed individuals who enrolled in state Medicaid benefits, either before or after the Medicaid expansion.

Both individual and state-level incentives appear to influence disability applications. The researchers found evidence that three distinct mechanisms were at work, two of which operated at the individual level and one at the state level.

Although the number of SSDI applications increased modestly in the first year after the reform was implemented compared with neighboring states, there was little evidence of an increase in the following years. Although the initial increase could have been caused by pent-up demand for disability benefits among those who had been working with impairments or by state-level efforts to encourage SSDI applications from qualified individuals benefiting from the Medicaid expansion, the aftermath of the reform also coincided with the Great Recession that began in late 2007. The timing of the reform, which was phased in between October 2006 and July 2007, meant that the researchers were unable to distinguish the effects of the recession from subsequent effects of the reform.

The balance of disability applications could shift toward SSDI (as opposed to SSI), at least in the short term

Because state-level incentives encourage SSDI applications in places with low health insurance rates, we may still see an increase in SSDI applications despite a net decrease in total applications. This increase will probably be concentrated in states that have decided to accept ACA funding to expand Medicaid coverage and should taper off within a few years.[2]