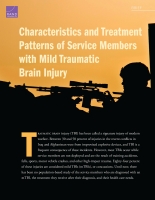 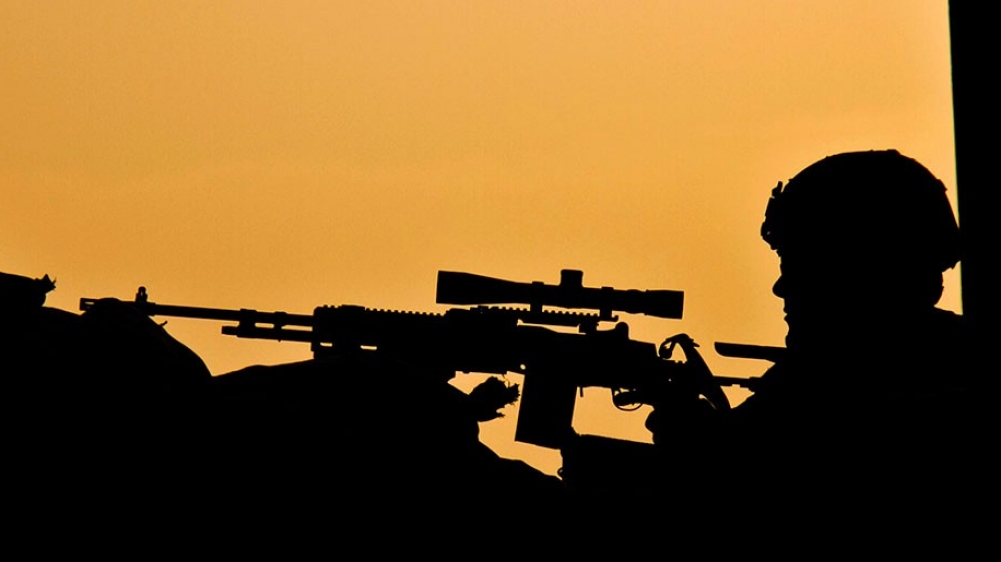 Traumatic brain injury (TBI) has been called a signature injury of modern warfare. Between 30 and 50 percent of injuries in the recent conflicts in Iraq and Afghanistan were from improvised explosive devices, and TBI is a frequent consequence of these incidents. However, most TBIs occur while service members are not deployed and are the result of training accidents, falls, sports, motor vehicle crashes, and other high-impact trauma. Eighty-four percent of these injuries are considered mild TBIs (mTBIs), or concussions. Until now, there has been no population-based study of the service members who are diagnosed with an mTBI, the treatment they receive after their diagnosis, and their health care needs. 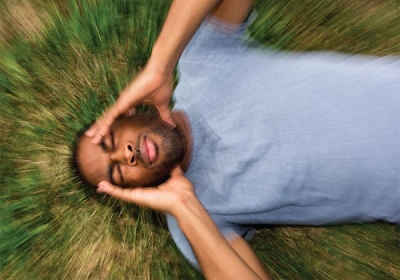 Mild cases of TBI can be challenging to identify and treat because of the variation in symptoms, conditions that can co-occur with the injury, and other factors. To deliver the most efficient and effective treatment for service members with mTBI, it is important to first understand how many and which service members are diagnosed, where they receive care, the types of treatment they are provided, and the duration of their care. The ultimate goal of improving care for these service members — and the outcomes of that care — depends on a solid evidence base. A RAND study took the first step in addressing this gap by profiling the service member population diagnosed with mTBI and the characteristics of the care they received in nondeployed settings.

As the number of TBIs among active-duty military service personnel has grown, so has the number of TBIs diagnosed through the Military Health System (MHS) — from 12,470 in 2002 to a peak of 32,668 in 2011, according to data from the Defense and Veterans Brain Injury Center. Common symptoms of mTBI include headache, sleep disorders, dizziness, and balance problems. In addition, mTBI frequently co-occurs with behavioral health conditions, such as depression and post-traumatic stress disorder.

The RAND study looked specifically at the nondeployed active-duty service member population with a new mTBI diagnosis in calendar year 2012, the most recently available full year of data at the time of the study. The study drew on patient health care data from the MHS Data Repository, which maintains records on all health care encounters paid for by the MHS. (These records did not contain information about treatments provided to service members during deployments.)

Which Service Members Are Diagnosed with an mTBI?

The study identified several trends in the demographic and service characteristics of nondeployed active-duty service members diagnosed with a new mTBI in 2012:

Service members received their mTBI diagnoses in a variety of settings, with about 58 percent diagnosed in a military treatment facility. Among those who were not, 80 percent were diagnosed in a civilian emergency department. The vast majority of service members had their next health care visit in a military treatment facility. However, these visits occurred in a range of settings, including primary care clinics and specialty behavioral health or neurology clinics. With so many different types of providers diagnosing and treating these service members, coordination and tracking of care may be challenging. Indeed, MHS records showed many inconsistencies in how diagnostic and subsequent health care visits were coded, suggesting a need for coordination of care across providers.

Which Health Conditions Are Common in Service Members with mTBI?

The diagnostic coding guidance recommends that providers record a TBI diagnosis for the patient's first visit after the injury, but subsequent visits are coded according to the patient's symptoms. Gaining a complete picture of the care that service members received for mTBI required identifying health conditions that were potentially associated with the mTBI.

The analysis also took into account co-occurring diagnoses for behavioral health problems. The study examined the proportion of service members who received treatment for these conditions in the six months before their 2012 mTBI diagnosis and during the six-month study observation period after the diagnosis, as shown in Figure 2.

A third of service members received a CT scan in the six months after their mTBI diagnosis. Other common evaluations included psychiatric diagnostic evaluations (28 percent) and physical therapy evaluations (25 percent).

What Treatments Do Service Members with mTBI Receive in the Six Months After Their mTBI Diagnosis?

U.S. Department of Veterans Affairs and U.S. Department of Defense (DoD) clinical practice guidelines for the treatment of mTBI recommend that individuals limit physical and mental activity and remain in a low-stimulus environment immediately after a concussion. If symptoms persist, the guidelines recommend additional evaluation and symptom-focused treatment.

Most service members in the 2012 mTBI cohort received no treatment or only short-term treatment for symptoms and co-occurring conditions after their mTBI diagnosis, suggesting that these patients generally recovered quickly.

A third of service members received a CT scan in the six months after their mTBI diagnosis. Other common evaluations included psychiatric diagnostic evaluations (28 percent) and physical therapy evaluations (25 percent).

Thirty percent received psychotherapy in the six months after their mTBI diagnosis. Less common were physical therapy (24 percent) or complementary/alternative medicine (10 percent). Medication treatment was common; sixty percent filled a prescription for an analgesic in the six months following their mTBI diagnosis, while 45 percent filled a prescription for an opioid, and 24 percent for an antidepressant.

Those with a history of TBI were more likely to receive diagnostic assessments, psychotherapy, physical therapy, and other treatments, as well as medications commonly prescribed for mTBI-related symptoms.

Most service members in the 2012 mTBI cohort received no treatment or only short-term treatment for symptoms and co-occurring conditions after their mTBI diagnosis, suggesting that these patients generally recovered quickly.

Although most service members with mTBI received treatment for only a short period after diagnosis, a sizable minority (10–20 percent) continued to receive care for three months or more after the mTBI diagnosis. Care of this duration is considered persistent. Those who received persistent care received significantly more diagnostic assessments and therapies than their counterparts without long-term problems. They were also much more likely to be diagnosed with conditions that commonly co-occur with mTBI. For example, around 70 percent were diagnosed with memory loss or sleep disorders in the six months after their 2012 mTBI diagnosis, compared with 10 percent of those who did not receive persistent care.

The available clinical and administrative data on service members diagnosed with mTBI posed a number of challenges to characterizing this population and their treatment and identifying their persistent care needs. The following recommendations point to areas in which MHS could refine its data collection and care coordination practices to enable additional insights to improve the treatment and outcomes for service members with mTBI. 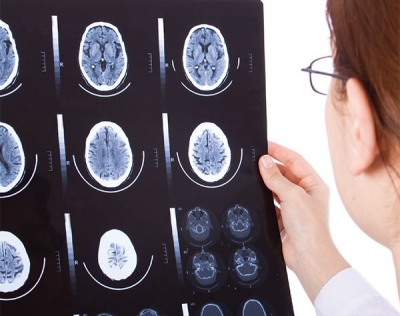 Service members diagnosed with mTBI receive treatment in a variety of clinical settings — not just in military facilities. It is important for the MHS to understand the challenges and strategies for care coordination and to identify best practices.

Assess the Quality of Care for Service Members with mTBI

Future efforts should extend these analyses to examine not only the type of care provided but also its quality. These studies will need to incorporate other data sources, as the available administrative data are not adequate to assess providers' adherence to clinical practice guidelines. In addition, given the variability in symptom presentation and recovery, the MHS should work to develop clearer standards of care for mTBI.

Good administrative data should be considered integral to health care quality because these data help track the status of patients and the treatments and procedures they receive. DoD TBI coding guidance requires that providers record a TBI diagnosis only at the first visit, with subsequent visits coded with relevant symptom diagnostic codes. As a result, it is not possible to use administrative data to observe treatment for mTBI over time. DoD should consider whether the advantages of the current TBI coding guidance outweigh the disadvantages for understanding the nature of care provided to service members with TBI. 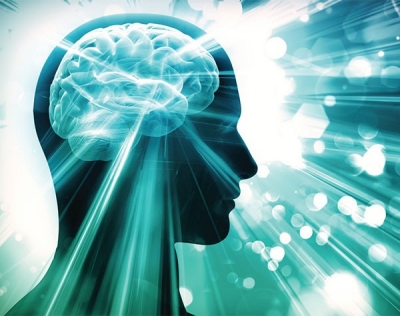 Administrative data are collected for multiple purposes, including legal and financial reviews, that are largely unrelated to surveillance and research. This limits the data's utility for analysis. Improving connections between administrative claims and other clinical data (e.g., chart data, pharmacy data) would facilitate a wide range of research. Conduct Further Research on the Conditions and Care of Service Members with mTBI This study was designed to establish a foundation for hypothesis-directed clinical studies. To that end, there are a number of areas that should be explored with further multivariate analyses to help the MHS confirm and interpret the relationships among patient, clinician, and setting factors in care patterns and outcomes for service members with mTBI. Multivariate regression can take multiple variables into account, helping to clarify when observed differences may be due to other factors. In particular, future analyses should focus on care patterns and their predictors, variations in diagnoses and care, and the cohort with persistent mTBI-related problems.

Even mild TBIs — the most common type of TBI — can cause persistent problems for service members, and those who have sustained multiple TBIs are much more likely to be diagnosed with co-occurring health conditions. Given how common the injuries are both on and off the battlefield, it is critical to understand the population of service members who sustain these injuries. A better understanding of their symptoms and care can provide insights into the needs of these service members, helping to ensure that they receive high-quality care and achieve the best possible outcomes.