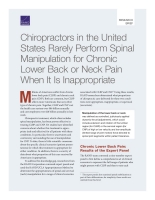 Millions of Americans suffer from chronic lower back pain (CLBP) and chronic neck pain (CNP). Both are common, but CLBP affects more Americans than any other type of chronic pain. Together, CLBP and CNP cost the health care system over $86 billion annually and cost employers over $20 billion annually in lost work.

Chiropractic treatment, which often includes spinal manipulation, has been proven effective in treating CLBP and CNP. Yet studies have identified concerns about whether this treatment is appropriate (safe and effective) for all patients with these conditions. In particular, there is uncertainty and controversy surrounding the use of manipulation for CNP. To date, there is little scientific consensus about the specific clinical scenarios (patient presentations) for which this treatment is appropriate for either condition. In addition, there is a scarcity of data about what proportion of this care received by Americans is appropriate.

To address this knowledge gap, researchers from the RAND Corporation convened expert panels and used the RAND/UCLA Appropriateness Method to determine the appropriateness of spinal and cervical (neck) manipulation for a range of clinical scenarios associated with CLBP and CNP.[1] Using these results, RAND researchers determined what proportions of chiropractic care delivered for these two conditions were appropriate, inappropriate, or equivocal (uncertain).

Manipulation of the lower back or neck was defined as controlled, judiciously applied dynamic thrust (adjustment), which could include extension and rotation of the lumbar region (for CLBP) or the cervical region (for CNP) of high or low velocity and low-amplitude (limited range of joint motion) force directed to spinal joint segments within patient tolerance.

Chronic Lower Back Pain: Results of the Expert Panel

The RAND team convened a nine-member expert panel to first define a comprehensive set of clinical scenarios to represent the full range of patients who might present with CLBP and then to rate each scenario as to the degree to which manipulation was appropriate for those patients.

These scenarios consisted of patient characteristics that a clinician would use when considering appropriate treatment: their history, symptoms, physical and radiographic findings, and response to prior treatment. After eliminating implausible combinations of characteristics, the panel agreed on a set of 900 unique clinical scenarios to rate. The panel then used the RAND/UCLA Appropriateness Method to rate on a 1–9 scale whether spinal manipulation was appropriate (that is, the expected health benefits exceeded the potential negative consequences by enough to be worthwhile) for each scenario. The panel rated each scenario twice. Panelists first rated each scenario based on the available literature summarized by the team and on their own clinical expertise; then, panelists rated each scenario again after discussion with other panelists. The clinical scenarios were organized into sections for ease of rating. Once one (the first) clinical scenario in a section had been rated, the others only differed by one or two patient characteristics and could be evaluated quickly.

Sixty-nine percent of clinical scenarios for chiropractic treatment of CLBP were rated as equivocal. In these scenarios, there was agreement that benefits were roughly equal to the risks, or there was uncertainty as to the relationship between benefits and risks. For the remaining scenarios, manipulation for CLBP was rated appropriate in more scenarios (19 percent) than it was rated inappropriate (12 percent—see Table 1).

The team convened a similar expert panel to define and rate clinical scenarios for treating CNP with cervical manipulation. For CNP, the RAND team and CNP panelists defined 372 unique clinical scenarios representing the range of patients who could present with this condition. The panelists used the RAND/UCLA Appropriateness Method to rate the appropriateness of manipulation for patients in each scenario.

In Practice, Most Manipulation for Chronic Lower Back Pain Was Appropriate

Using the results from the expert panels, researchers calculated how much of the chiropractic care for CLBP delivered in the United States was appropriate. To determine the rate of appropriateness, the researchers identified a sample of clinics, randomly sampled their patient charts, abstracted appropriateness-related patient characteristics from each chart, and used those characteristics to match each patient chart to one of the 900 clinical scenarios and its appropriateness rating. The ratings for each chart were used to calculate the rates of appropriate, inappropriate, and equivocal care. They sampled 759 patients with CLBP (635 of whom were treated with manipulation, 124 of whom were not).

Researchers performed the same analysis on charts from a sample of 599 patients with CNP (515 of whom were treated with manipulation, 84 of whom were not). Possibly reflecting the controversies and uncertainty about chiropractic care for CNP, most CNP patients received manipulation when it was equivocal—that is, it was neither clearly appropriate nor inappropriate (478 cases). Chiropractors saw only 20 CNP patients for whom manipulation was inappropriate, but they performed manipulation in almost all of these cases (18 out of 20) (Figure 2). Chiropractors did apply manipulation significantly less often for patients with CNP who had substantial trauma etiology, no joint dysfunction, or no radiographs.