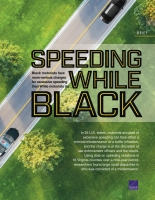 In 25 U.S. states, motorists accused of excessive speeding can face either a criminal misdemeanor or a traffic infraction, and the charge is at the discretion of law enforcement officers and the courts. Using data on speeding violations in 18 Virginia counties over a nine-year period, researchers found large racial disparities in who was convicted of a misdemeanor.

Black motorists cited for speeding were almost twice as likely as White motorists to be convicted of a misdemeanor when their speed was in the range that qualified for the more serious charge.

Whom Officers Charged Explained 55% of the Disparity

Among cited motorists speeding at an excessive level, Black motorists were more likely than White motorists to be charged with a misdemeanor instead of an infraction.

Whom Courts Convicted Explained 45% of the Disparity

Most Motorists Convicted of a Misdemeanor Don't Go to Jail, but There Are Other Repercussions

Statewide automated speed enforcement would reduce the potential for officers to engage in disparate treatment and would ensure that motorists in different counties are policed in the same way. In such a system, cameras identify vehicles speeding above a defined threshold, and citations are automatically issued to the vehicle owner. The misdemeanor speed threshold could be set so that the overall level of enforcement is similar to current levels (in which a majority of motorists' potential misdemeanor charges are reduced), and the criteria would apply to all motorists across the state in the same way regardless of race or location.

Remove barriers to appearing in court. For example, traffic tickets could be restructured to clarify the next steps after being cited, and a system could send motorists a text message reminder about upcoming court dates. Also, courts could hold hearings virtually, which would address issues with child care and transportation and would require motorists to take less time off from work or other obligations.

Create online platforms that allow motorists to submit information and judges to examine it and make decisions at their convenience. These platforms would, in effect, mask each motorist's race from the judge, which could limit disparate treatment. The platforms could also result in a more standardized process that could lessen the importance of having an attorney present for the court hearing.