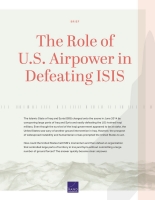 The Role of U.S. Airpower in Defeating ISIS 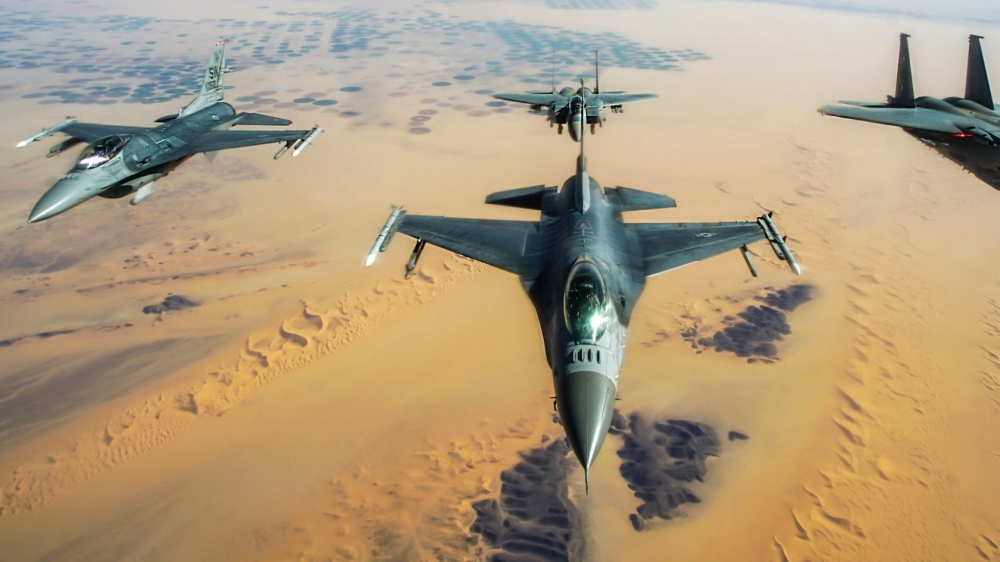 The Islamic State of Iraq and Syria (ISIS) charged onto the scene in June 2014 by conquering large parts of Iraq and Syria and easily defeating the U.S.-trained Iraqi military. Even though the survival of the Iraqi government appeared to be at stake, the United States was wary of another ground intervention in Iraq. However, the prospect of widespread instability and humanitarian crises prompted the United States to act.

How could the United States halt ISIS's momentum and then defeat an organization that controlled large parts of territory in Iraq and Syria without committing a large number of ground forces? The answer quickly became clear: airpower.

How Airpower Was Critical to Operation Inherent Resolve (OIR)

In OIR, the United States adopted a “limited liability, limited risk” strategy to defeat ISIS that called for Iraqi and Syrian partner ground operations to provide the central effort.

The U.S. military and its coalition partners—29 countries that contributed military support—instead played a supporting role, primarily contributing critical airpower to combat operations. For example, airpower halted ISIS's 2014 offensive, notably saving Baghdad, Erbil, and Kobani. Strategic air strikes then weakened ISIS finances by targeting the group's cash reserves and oil business. Iraqi and Syrian partners would not have been able to retake territory from ISIS without coalition airpower, which provided essential intelligence and precision strikes and bolstered partner troops' confidence and motivation against a fearsome enemy.

Snapshots Discussed in This Brief

The RAND Corporation conducted a comprehensive analysis of U.S. and coalition partner air operations against ISIS between August 2014 and March 2019. This brief offers four snapshots about how air operations contributed to successful outcomes in OIR; notes key conclusions from the larger study; and provides recommendations to the joint force and the U.S. Air Force (USAF).

As ISIS advanced on the small town of Kobani, located on the Syrian-Turkish border, in September and October 2014, the jihadist group still conveyed an air of invincibility, leading tens of thousands of Kurds to flee the city. An estimated 4,000 ISIS fighters advanced on the city with heavy weapons, while Kobani's mostly Kurdish defenders possessed only small arms.

Over five months of operations, coalition aircraft employed 2,025 weapons, 1,700 of which were precision-guided munitions, and air-dropped supplies and weapons to Kurdish partners on the ground.

At the time, the United States had no forces on the ground and had conducted only limited combat operations in Syria. But because of its flexibility, speed, and range, airpower could swiftly shift from holding the front lines in Iraq to surging over Kobani when ISIS forces massed and presented themselves as targets. The coalition quickly established combat air patrols over the city 24 hours a day. The United States took on the preponderance of the effort, as most coalition members were prohibited from operating in Syria. ISIS tried to make a stand at Kobani by flowing reinforcements into the fight to show that it could prevail against the Syrian Kurds and withstand coalition airpower. But U.S. aircraft delivered precision air strikes, including in situations "danger close" to partner forces, without placing U.S. joint terminal air controllers on the front lines. Kobani was the most aggressive use of airpower at that point in OIR (see Figure 1).

As Gen John Allen, former special presidential envoy for the global coalition to counter ISIS, later noted, Kobani was the "first real battle . . . where we had an opportunity to make a difference, [and] it was clear that the Islamic state wanted to wipe out the Kurdish population." After suffering heavy losses at Kobani, ISIS proved to be less willing to go on the offensive and seize new territory, shifting its strategy from one premised on "lasting and expanding" to one focused simply on lasting. Once Kobani was secure, the coalition deftly refocused its air operations to Iraq and pushed ISIS forces away from Baghdad.

At one point, ISIS was known as the richest terrorist group in the world, and its resources were an important source of its strength. Because of international sanctions, ISIS operated entirely in cash, which created vulnerabilities that the CJTF-OIR aimed to exploit. Beginning in January 2016, coalition aircraft began to hit ISIS's cash reserves in Operation Point Blank, which complemented an ongoing operation to destroy ISIS's oil business (Tidal Wave II). Point Blank hollowed out ISIS's existing cash reserves, while Tidal Wave II disrupted ISIS's cash flows.

Although Point Blank was a small, focused effort, its targets had significant monetary value and therefore produced outsized returns. As the Combined Forces Air Component Commander (CFACC) between 2015 and 2016 then–Lt Gen Charles Q. Brown explained, "every bomb now has a greater impact." The total amount ISIS lost to coalition air strikes is unknown, but officials stated that more than $500 million had been destroyed by August 2016.

Point Blank was a high-leverage strategic operation that combined with the destruction of ISIS's oil infrastructure and, most importantly, its concurrent territorial losses to create a liquidity crisis for ISIS, which hampered the group's ability to govern and contributed to an overall decline in the number and morale of available fighters.

The Pentagon had identified Mosul as one of ISIS's "military, political, economic and ideological centers of gravity" and developed a campaign plan to liberate the heavily fortified city, which was defended by between 4,500 and 7,500 ISIS fighters. When the Iraqis attacked Mosul in October 2016, ISIS responded by launching ten to 15 VBIED attacks a day. Nearly 80 percent of ISIS's VBIED attacks were successful, which had a devastating physical and psychological effect on the Iraqi forces. Under these conditions, many of the Iraqi units refused to maneuver, enabling ISIS fighters to remain hidden from coalition aircraft. Consequently, the Iraqi offensive nearly ground to a halt.

To mitigate the damage caused by these attacks and to buy time to gather intelligence on ISIS's VBIED network, the Commander of the Combined Joint Forces Land Component Command (CJFLCC), then-MG Joseph Martin, requested air strikes to crater the roads nightly for several weeks "to create obstacles and impede ISIS's ability to move VBIEDs forward." At the same time, the CJFLCC leveraged its air and ground intelligence assets to conduct a target systems analysis that identified two critical nodes in the VBIED network—the engineers who built the VBIEDs and the stores of homemade explosives. This process produced vetted targets in 24 to 48 hours, and strikes were executed by coalition aircraft. These coalition air strikes energized the Iraqi offensive and dismantled ISIS's VBIED capacity. The counter-VBIED operation also was aided by the delegation of target engagement authorities and the placement of U.S. advisers on the front lines with Iraqi forces.

Although this targeting approach was nondoctrinal, the CFACC during the Mosul operation, now-Gen Jeffrey Harrigian, concluded that it was exactly what was needed to generate momentum to keep the Iraqis moving and noted that the process "worked" in Mosul. As a result of these efforts, only 20 percent of ISIS's attacks caused damage. Previously, 80 percent of VBIED attacks in Mosul killed Iraqi forces or damaged equipment (see Figure 2).

Reducing the VBIED threat and demonstrating that the coalition was responsive to the Iraqis increased the willingness of Iraqi forces to attack, which in turn began a virtuous cycle that stimulated ISIS to come out of its hiding spots and enabled CJTF-OIR to identify new targets and use ground- and air-based fires to engage them.

Snapshot Four: The Importance of Aerial Refueling to the Air War Against ISIS 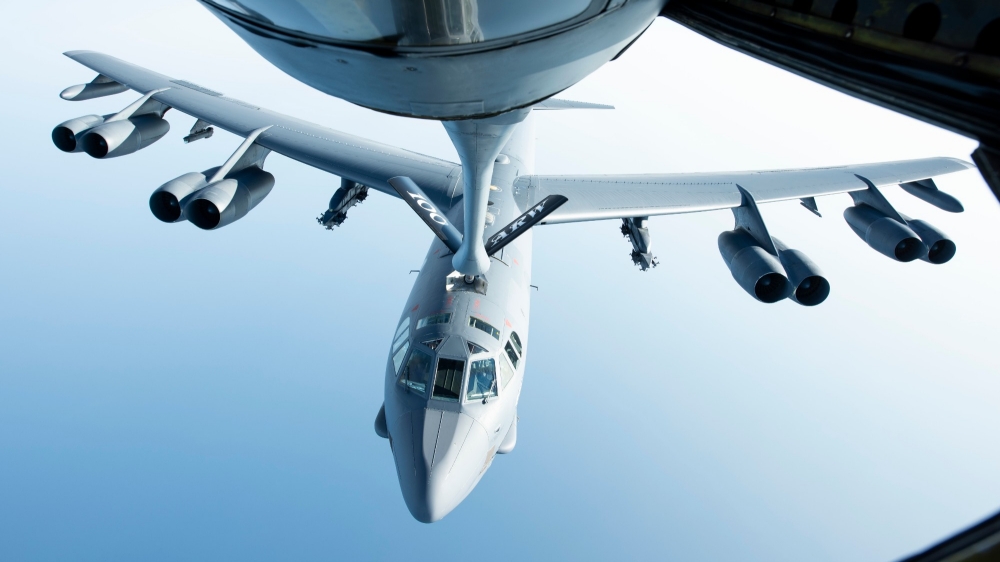 Tankers were indispensable to the air war against ISIS. With partner ground forces relying heavily on coalition air support for defensive and offensive operations, aerial refueling was needed to enable coalition aircraft to fly farther, stay airborne longer, collect more intelligence, conduct more strikes, and provide uninterrupted close air support. Despite a robust air base posture, aerial refueling was absolutely essential in OIR because many of these bases were relatively far from key battlefields, especially for shorter-range fighter and attack aircraft, which typically required several aerial refuelings over the course of each sortie (see Figures 3 and 4).

In total, the coalition flew more than 56,000 aerial refueling sorties, an average of more than 1,000 sorties a month throughout the nearly five-year operation.

In general, about one-quarter of all OIR sorties were tankers, with an average of more than 34 tanker sorties a day. USAF tankers conducted the majority of aerial refueling in OIR, although Australia, the United Kingdom, Canada, Germany, France, Singapore, and Italy also deployed tanker aircraft. Each tanker averaged roughly six refuelings per sortie. Although demand for refueling in OIR was intense, it never outstripped supply, albeit at the cost of sustaining tanker operations at an intensity that placed heavy demands on aircraft and crews. Moreover, USAF tankers and their crews simultaneously supported operations over Afghanistan, as well as other theater requirements in U.S. Central Command's area of responsibility.

RAND's analysis of how the United States and its coalition partners employed airpower against ISIS during OIR—highlighted by the examples in this brief—offers strategic and operational-level insights that may help the USAF, the joint force, and coalition partners better plan and prepare for future air wars against nonstate and near-peer adversaries.