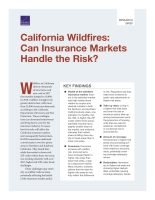 Can Insurance Markets Handle the Risk?

Wildfires in California destroy thousands of structures each year, and in 2017 that number jumped to 10,800. In 2018, wildfires wrought even greater destruction, with more than 22,000 structures destroyed, according to the California Department of Forestry and Fire Protection. Those conflagrations can devastate homeowners and bring heavy costs for the insurance industry. To assess how fire risks will affect the California insurance market, and consequently homeowners, RAND researchers undertook a novel study in two fire-prone areas in Northern and Southern California. They found that, while the market in lower-risk ZIP codes within those two areas was working relatively well as of 2017, higher-risk ZIP codes faced challenges.

Those challenges may intensify as wildfire risks increase, potentially affecting the health of the insurance market, policy affordability, coverage adequacy, and insurer profitability. The RAND team found that wildfire risk is likely to increase markedly in some areas under business-as-usual greenhouse gas (GHG) emissions scenarios.

Policymakers, insurers, and homeowners all are exploring how to adjust to changing wildfire risk in California. This research is designed to help them consider policy options for the insurance market.

To answer these questions, the researchers used a combination of quantitative and qualitative methods: wildfire scenario analysis that accounted for multiple climate projections and population growth patterns, regression analysis to investigate the impact of the change in risk on indicators of insurance market health, and interviews with insurers, regulators, consumer advocates, and county staff on possible market responses to changes in risk.

What the Analysis Reveals

Admitted insurers
Insurance companies approved by a state's insurance department and subject to its pricing and other regulations. In the event of company failure, an insurer-funded guarantee fund will pay claims up to $500,000.
Surplus lines insurers
Insurance companies that write policies on risks that admitted insurers will not cover. Policies are generally more expensive. There is no guarantee fund that will step in to pay claims in the event of company failure.
FAIR Plan
The California Fair Access to Insurance Requirements Plan is a pool composed of all the admitted insurers in the state set up to assure the availability of basic property insurance. Consumers can go directly to the FAIR Plan for coverage.

Evidence suggests that insurer-initiated nonrenewal rates in the admitted market are somewhat higher in higher-risk ZIP codes, but major differences have not been observed so far.

Insurance rates per $1,000 of coverage in the admitted market increase substantially with wildfire risk, and have been growing more rapidly in recent years compared with lower-risk areas. Even so, many insurers believe that the difference between premiums for low- and high-risk properties does not fully reflect the actual difference in risk. At the time this research was published, the California Department of Insurance held that insurers haven't provided sufficient evidence to support a request for higher premium differentials.

Increasing structure risk does not appear to be decreasing homeowners' insurance policy take-up rate. However, homeowners in high-risk areas are purchasing less coverage relative to structure value. They also are selecting higher deductibles than homeowners in lower-risk ZIP codes. Further analysis of the adequacy of coverage is warranted.

Changing Risk and the Market

The RAND team projects that by 2055 the insurance market in the Sierra Foothill study area for the highest-risk ZIP codes will experience several changes affecting insurers and homeowners:

The RAND team identified regulatory and other factors that will influence how climate change will affect the residential insurance market. Insurance regulatory issues include the extent to which rates reflect the full difference in fire risk across structures, whether probabilistic models of wildfire risk are allowed in the rate-approval process, and whether the net reinsurance margin is allowed as an expense in rate filings. Although there is no indication that current FAIR Plan that rates are artificially low, the extent to which rates offered by the FAIR Plan keep up with the increase in risk will also be an important factor in how insurance markets respond to climate-induced changes in wildfire risk.