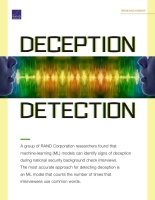 A group of RAND Corporation researchers found that machine-learning (ML) models can identify signs of deception during national security background check interviews. The most accurate approach for detecting deception is an ML model that counts the number of times that interviewees use common words.

How the Experiment Worked

Four Models Were Tested to See How Accurately They Detected Deception

Word vectors
This model counted the number of times the interviewees used common words.
Linguistic stance
This model tested the use of stance vectors—sorting words into categories.
Metadata
This model examined other meta-level features of speech, such as speaking cadence, average unique word length, and the fraction of words with more than six letters.
Chat and VTC word vectors
This model looked at word vectors in the transcripts of interviews done via text-based chat and VTC.

Bias Can Make the Models Less Accurate for Certain Groups

All but one model detected deceit more accurately among men than women, which suggests that there was gender bias in the model outputs. If gender bias exists, there could be other biases, such as race and ethnicity. The following graphs show one example of the difference in accuracy by gender—in this case, for the word vector model.

When the model was trained on both men and women, it was 76 percent accurate at detecting deception. When the models were trained using participants' genders, they were more accurate for men.

Other Differences Between Men and Women

The models found that men and women used different words to deceive (other researchers have made similar findings). Men were less likely to use the word I when lying and more likely to use it when telling the truth.

Another notable speech pattern—although it had no link to lying or truth-telling—was that women were more likely than men to use the word man (for example, to describe Edward Snowden). This is an important distinction because it suggests that the subject's gender was more salient for women than men. It also raises the question of whether the subject's or interviewer's gender could have influenced a subject's responses to interview questions.

Finding
There are linguistic signals when people try to deceive, and ML tools can detect some of these signals for interviews conducted via VTC and chat.
Recommendation
The federal government should test ML modeling of interview data that uses word vectors to identify attempts at deception.

Finding
Accuracy rates for detecting deception were similar for interviews conducted over VTC and chat.
Recommendation
The federal government should test VTC and chat-based interviews as alternatives to in-person security clearance interviews for certain cases.
Recommendation
The federal government should test chat-based questionnaires without a human interviewer present to augment existing in-person interviews. Investigators could use the data from chat and a face-to-face (or virtual) interview to identify concerns that merit further investigation.

Finding
This exploratory study developed a workflow for transcribing and analyzing interviews that were audio recorded: (1) Amazon Web Services Transcribe used ML to automatically transcribe each interview recording, (2) a member of the research team listened to the audio and corrected the transcripts, and (3) the models analyzed the corrected transcripts.
Recommendation
The federal government should use ML tools to augment existing investigation processes by conducting additional analysis on pilot data, but the government should not replace existing techniques with these tools until they are sufficiently validated.

Finding
Most models were more accurate for men than women. This finding suggests that other sources of biases could also exist.
Recommendation
The federal government should validate any ML models that it uses for security clearance investigations to limit bias on the basis of ascribed characteristics (e.g., race, gender, age) of interviewees.
Recommendation
The government should have a human-in-the-loop to continuously calibrate any ML models used to detect deception during the security clearance investigation process.