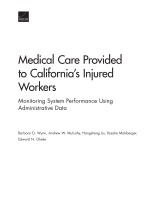 Following reforms in 2003–2004 to the California workers' compensation (WC) program, expenditures for medical care provided to injured workers declined for several years, only to begin rising again in 2007. By 2012, total medical spending had increased 32 percent relative to 2007 levels despite a reduction in the number of WC claims. Senate Bill (SB) 863 made additional reforms intended to improve the efficient delivery of high-quality care to injured workers. The Commission on Health and Safety and Workers' Compensation asked RAND to identify the factors that explain the spending increases and to explore the feasibility of using medical data from the Workers' Compensation Information System (WCIS) for ongoing monitoring of system performance and in-depth analyses of selected issues affecting system performance. This report provides a framework for understanding changes in medical spending levels and provides the results from RAND's analysis of WCIS data for 2007–2012. It establishes a baseline that can be used in a future study to evaluate the impact of the SB 863 provisions.

The research described in this report was prepared for the Commission on Health and Safety and Workers’ Compensation (CHSWC) and conducted by the Justice Policy Program within RAND Justice, Infrastructure, and Environment.