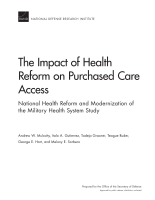 The Impact of Health Reform on Purchased Care Access

This report assesses the impact of a key aspect of reform in the broader U.S. health care system: the Affordable Care Act's coverage expansion. The authors estimated how an influx of newly insured patients through the coverage expansion may change the way that civilian providers choose to interact with the TRICARE program. RAND's approach for this analysis combined data from the Defense Health Agency, publicly available data sources, and projections of health insurance coverage in 2016 from the RAND COMPARE microsimulation model to predict how physicians' decisions to treat TRICARE enrollees will change over time. The report culminates in lists and maps of counties where civilian physicians are most likely to face financial incentives to substitute newly insured patients for current TRICARE patients. The authors found that about 7 percent of current TRICARE visits are delivered by a community provider who could face financial incentives after the Affordable Care Act's coverage expansion to replace their current TRICARE patients with the newly insured. This work is one indicator of potential future TRICARE access concerns rather than an exact prediction of providers' decisions.