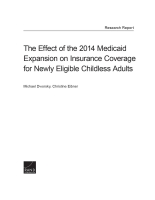 The authors used the National Health Interview Survey (NHIS) to estimate how the Affordable Care Act Medicaid expansion affected health insurance enrollment, by source of coverage, among childless adults who became newly eligible for Medicaid in 2014. The NHIS data allowed the authors to report changes in enrollment by source of coverage and to conduct subgroup analyses of Medicaid take-up by gender, age, and other characteristics. Newly eligible childless adults in expansion states were 8.9 percentage points more likely to be insured in 2014 relative to similar adults in nonexpansion states, reflecting gains in Medicaid with little to no offsetting decrease in private coverage. Subgroup patterns of take-up among the newly eligible differed from findings previously reported for the wider low-income population, many of whom were previously eligible. Because these estimates isolate the behavior of newly eligible adults, these findings may be useful for anticipating take-up if nonexpansion states with limited Medicaid eligibility under current law choose to expand in the future. Similarly, because the control group excludes adults who became eligible for subsidized insurance coverage through the Health Insurance Marketplace, these findings provide insight into the effects of Medicaid expansion relative to a counterfactual involving neither Medicaid expansion nor Marketplace subsidies.

This research was funded by the Robert Wood Johnson Foundation (RWJF) through its State Health Access Reform Evaluation (SHARE) initiative and conducted by RAND Health.