RAND Corporation researchers developed a national contextual database of demographic, social, economic, housing, cultural, and urbanization measures (1990–2010) for use in research that examines how community characteristics are related to individuals' experiences. They provide this set of contextual data measures as a courtesy, and this document describes the construction and contents of this neighborhood contextual database. 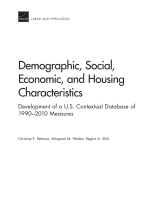 Research on neighborhoods' and communities' roles in shaping people's experiences has expanded rapidly in the past two decades. As part of a research project on the effect that neighborhoods have on cognitive aging in the older U.S. population, RAND Corporation researchers developed a neighborhood contextual database containing a specific set of measures for use in that research. They generated these demographic, social, economic, housing, cultural, and urbanization measures from decennial census and American Community Survey data at the census tract level, plus a smaller subset of similar measures at the county and metropolitan statistical area (MSA) levels. The data cover 1990–2010, with values for intercensal year measures not available in American Community Survey summary files having been created using the method of linear interpolation. Census tract–level measures and county measures represent the 2000 census boundaries. The MSA-level measures mainly use the 2000 MSA coding. The authors provide this set of contextual data measures as a courtesy, and this document describes the construction and contents of this neighborhood contextual database.