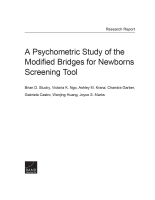 A Psychometric Study of the Modified Bridges for Newborns Screening Tool

The Modified Bridges Might Overidentify Mothers as Being High Risk

The research described in this report was conducted by RAND Health.