California's Juvenile Justice Crime Prevention Act provides funds for counties to offer evidence-based programs for high-need juvenile probationers and at-risk youths. This report evaluates the program on statewide and county measures. It also compares system costs for program youths in the six months before and after entering a program. 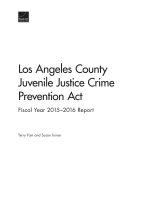 California's Juvenile Justice Crime Prevention Act was designed to provide a stable funding source for juvenile programs that have proven effective in curbing crime among at-risk and young offenders. It provides funds to counties to add evidence-based programs and services for juvenile probationers identified with higher needs for special services than those identified for routine probationers, at-risk youths who have not entered the probation system but who live or attend school in areas of high crime or who have other factors that potentially predispose them to criminal activities, and youths in juvenile halls. The California state legislature requires the Board of State and Community Corrections to submit annual reports evaluating the program on six outcome measures: (1) successful completion of probation, (2) arrests, (3) probation violations, (4) incarcerations, (5) successful completion of restitution, and (6) successful completion of community service. Each county can also measure supplemental outcomes. The report also compares juvenile justice system costs for program youths in the six months before they entered a program and in the six months after entering the program. Differences in outcomes between program participants and comparison-group youths are relatively small, but they are consistent enough that they appear to be real differences rather than statistical anomalies. County-developed supplemental outcomes tend to be more favorable than state-mandated big six outcomes, although samples tend to be considerably smaller than for big six outcomes.

The research described in this report was conducted by the Justice Policy Program within RAND Justice, Infrastructure, and Environment.