This report describes the Affordable Care Act's (ACA's) effects on nonelderly veterans' insurance coverage and demand for Department of Veterans Affairs (VA) health care and assesses the coverage and VA utilization changes that could result from repealing the ACA. 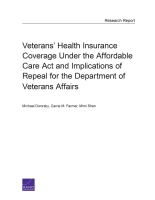 This report describes the Affordable Care Act's (ACA's) effects on nonelderly veterans' insurance coverage and demand for Department of Veterans Affairs (VA) health care and assesses the coverage and VA utilization changes that could result from repealing the ACA. Although prior research has shown that the number of uninsured veterans fell after the ACA took effect, the implications of ACA repeal for veterans and, especially, for VA have received less attention. Besides providing a new coverage option to veterans who are not enrolled in VA, the ACA also had the potential to affect health care use among VA patients.

Findings include the following: In 2013, prior to the major coverage expansions under the ACA, nearly one in ten nonelderly veterans were uninsured, lacking access to both VA coverage and non-VA health insurance. Uninsurance among nonelderly veterans fell by an adjusted 36 percent (3.3 percentage points) after implementation of the ACA, from 9.1 percent in 2013 to 5.8 percent in 2015. By increasing non-VA health insurance coverage for VA patients, the ACA likely reduced demand for VA care; the authors estimate that, if the gains in insurance coverage that occurred between 2013 and 2015 had not occurred, nonelderly veterans would have used about 1 percent more VA health care in 2015: 125,000 more office visits, 1,500 more inpatient surgeries, and 375,000 more prescriptions. Recent congressional proposals to repeal and replace the ACA would increase the number of uninsured nonelderly veterans and further increase demand for VA health care.

Insurance Coverage for Nonelderly Veterans Increased After the ACA

The research described in this report was sponsored by the Robert Wood Johnson Foundation and the New York State Health Foundation and conduced by RAND Health.