There is increasing concern over the common, repetitive forms of blast—often unrelated to combat—to which military members are exposed during service, and how those exposures could affect the central nervous system, potentially resulting in neurological and emotional consequences. The authors of this report review the relevant literature and identify research and policy gaps related to military occupational blast exposure. 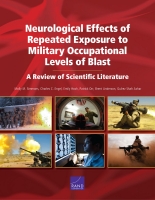 A Review of Scientific Literature

Over the past decade, there has been increasing awareness of the central nervous system (CNS) effects of exposure to explosive blast. A key driver of that awareness has been the blast-related injuries suffered during combat operations in Iraq and Afghanistan. With the near cessation of U.S. combat operations in these regions, concern has grown over common, repetitive forms of blast exposure during military service that are, most often, unrelated to combat. An example of such an exposure is routine military training involving heavy weaponry, such as artillery, recoilless rifles, and shoulder-held rocket launchers. These blast exposures are of a lower intensity than those causing acute combat-related injuries; however, repeated exposure may also have impacts on CNS structure, function, and development, as well as on the broader health of military service members.

The research team found no generalizable military-wide or service-specific population data (or ongoing studies) from which to estimate the occurrence of repeat, low-level MOB exposure or its potential health consequences

The research described in this report was sponsored by the United States Army and conducted by the Personnel, Training, and Health Program within RAND Arroyo Center.