This report assesses the effectiveness of China's industrial policies, using China's commercial aviation manufacturing industry as a case study. It evaluates China's efforts to create a national champion in this industry, and analyzes foreign manufacturers' efforts to protect key technologies when setting up production facilities there. It also offers policy options for foreign governments responding to Chinese policies. 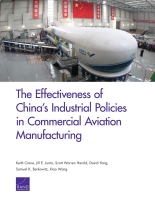 The Effectiveness of China's Industrial Policies in Commercial Aviation Manufacturing

Since economic reforms began in 1978, China has enjoyed rapid growth in exports, which have contributed to the country's impressive economic growth. Improvements in the quality of China's workforce, manufacturing technologies, and materials have enabled the country to enter new, more technologically sophisticated industries. In several such industries, which the Chinese government has frequently denoted as strategic, the Chinese government has employed industrial policies, formal and informal, to foster the development of national champions. As part of this strategy, the Chinese government has attempted to induce the transfer of technologies from foreign manufacturers to Chinese companies. To the extent that these policies have been successful, they have accelerated shifts in production and employment from industries located in other countries to China. This report explores the emerging commercial aviation manufacturing industry in China to examine the effectiveness of the policies and mechanisms the Chinese government has used to create "national champions;" evaluate the effectiveness of the steps taken by foreign manufacturers to prevent transfers of key technologies to potential future Chinese competitors when setting up manufacturing facilities in China; provide policy options that allow foreign governments to effectively respond to Chinese industrial policies; and alert Chinese policymakers to the downsides of China's current industrial policies.

The Chinese Government Views Aviation Manufacturing as a Priority

This research was funded by philanthropic contributions to RAND. The work was conducted within the Environment, Energy, and Economic Development Program, a part of RAND Justice, Infrastructure, and Environment.