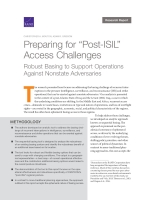 Researchers developed an interactive tool, called sequential basing, to identify robust basing options in recurrently changing environments, such as Africa and the Middle East. The tool is premised on the paradoxical constancy of ephemeral access, as driven by the underlying conditions of ever-evolving threats, shifting policy priorities, and other sources of political dynamism.

An example of the tool presented in this report focuses on a post–Islamic State of Iraq and the Levant context, a case in which the underlying conditions are shifting. The output of the tool consists of heat maps that highlight key points of strategic geography.