The U.S. military has mostly operated at a high operational tempo since the end of the Cold War, and there appears to be no significant reduction in demand on the horizon. This report draws on historical data to quantify gaps in the U.S. Air Force's capacity to meet potential future demands. 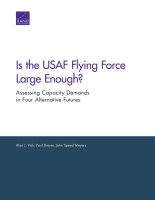 The U.S. military has mostly operated at a high operational tempo since the end of the Cold War, and there appears to be no significant reduction in demand on the horizon. However, the U.S. military has few analytical tools for identifying the force requirements associated with ongoing operations, and there are no systematic efforts within the Department of Defense to collect data on the nature of operational demands over time. This report is intended to help address this imbalance.

Drawing on a dataset of U.S. military operations since 1946, the authors quantify historical demands placed on the U.S. Air Force (USAF). They then use this historical evidence to estimate demands on the USAF flying force in four possible futures: two futures in which the United States enters a new cold war with Russia or China; one in which United States renews peace enforcement commitments like those between 1990 and 2000; and one in which U.S. military operations are dominated by global counterterrorism and counterinsurgency operations, as they have been since 2001.

The authors find that the current USAF force experiences capacity shortfalls in all four futures, and that no class of aircraft performs well across all four futures. The analysis suggests that prolonged operations are particularly stressing to the force, which is significant given that the average length of operations has been increasing since the end of the Cold War. The authors also find that the identified shortfalls cannot easily be corrected through changes to deploy-to-dwell policies and policies that set a maximum deployment length. Drawing on these findings, the authors provide recommendations for USAF and Department of Defense leaders and force planners.

The research described in this report was commissioned by the Director, Strategy, Concepts and Assessments, Headquarters, U.S. Air Force (USAF) and conducted by the Strategy and Doctrine Program within RAND Project AIR FORCE.