Were an Alzheimer's disease–modifying therapy to become available, there would be a substantial number of existing patients with mild cognitive impairment who would require screening, diagnosis, and treatment as quickly as possible. This research analyzes the preparedness of the health care systems in six European countries to ensure timely diagnosis and treatment of patients if an Alzheimer's therapy becomes available. 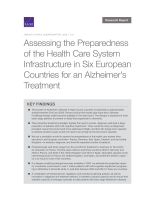 Does not include Appendix.

No disease-modifying therapy is currently available for Alzheimer's disease, but therapies are in development, and one may become available in the near future. Based on results from early-stage clinical trials, therapeutic development has focused on the hypothesis that Alzheimer's dementia must be prevented rather than cured, because candidate treatments have not been able to reverse the course of dementia. Thus, current trials target patients with early-stage Alzheimer's disease. Were a therapy to become available, patients could undergo first screening for signs of early-stage memory loss or mild cognitive impairment (MCI), testing for the Alzheimer's disease pathology, and then treatment with the aim of halting or slowing progression to Alzheimer's dementia. An important health systems challenge will arise if this new treatment paradigm bears out in late-stage clinical trials. In the 28 European Union countries, we estimate that approximately 20 million individuals over age 55 have MCI, although most people have not been tested for disease pathology. Thus, when a therapy first becomes available, there would be a substantial number of existing (or prevalent) MCI patients who would require screening, diagnosis, and then treatment as quickly as possible to prevent the progression to full-blown Alzheimer's dementia. This research analyzes the preparedness of the health care systems in six European countries — France, Germany, Italy, Spain, Sweden, and the United Kingdom — to ensure timely diagnosis and treatment of patients if a disease-modifying therapy for Alzheimer's becomes available.

The research described in this report was sponsored by Biogen and conducted within RAND Health.