Following the authors' earlier work in the United States and Europe, they use a simulation model that quantifies the capacity of the Canadian health care system to diagnose and treat people with early-stage Alzheimer's disease (AD) should a disease-modifying therapy become available. The report shows the impact of capacity constraints on the number of people progressing from mild cognitive impairment due to AD to Alzheimer's dementia. 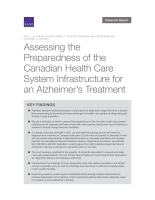 Does not include Appendix.

Alzheimer's disease (AD) is a chronic neurodegenerative disorder that leads to cognitive and functional decline, dementia, and premature death. Similar to other aging societies, Canada faces an increasing burden of this disease on patients and their caregivers, as well as on health care and long-term care resources.

The majority of disease-modifying therapies being studied in current trials target early stages of the disease — when there are symptoms of memory loss and cognitive but not functional decline, also described as mild cognitive impairment (MCI) — or even earlier, before symptoms manifest. The aim of these therapies is to delay or prevent progression of early-stage AD to Alzheimer's dementia.

The possibility of a future AD–modifying therapy for early stages of the disease has significant implications for health care delivery systems in terms of diagnosing and treating a large population. Following the authors' earlier work in the United States and Europe, they draw on publicly available data and expert insights to refine a simulation model that quantifies the capacity of the Canadian health care system to diagnose and treat people with early-stage AD.

The report presents the authors' conceptual framework, simulation model, and projections. They discuss the design of the model and show historical and projected capacity trends that affect diagnosis and treatment and show the impact of capacity constraints on wait lists, waiting times, and the number of people progressing from MCI due to AD to Alzheimer's dementia.

This research was sponsored by Biogen and conducted by the Access and Delivery Program within RAND Health Care.