Aerospace power has been a core feature of the People's Liberation Army's rapid modernization. This report examines how competition with the U.S. Air Force shapes Chinese thinking about developing this power. It also examines how China selects between "copying" foreign powers and "innovating" its own solutions, as well as the arenas of aerospace in which China chooses not to compete. 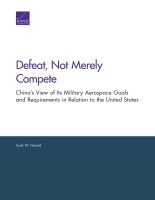 Over the past two decades, the Chinese People's Liberation Army (PLA) has made rapid advances in building up new capabilities and operational concepts. Aerospace power has been a core feature of the PLA's rapid modernization. In particular, since 2004, the PLA Air Force has pursued a service strategy aimed at developing the capacity to "simultaneously prosecute offensive and defensive integrated air and space operations." This report explores the extent to which the desire to "compete" with the U.S. Air Force (or other advanced air forces) shapes PLA thinking about the development of military aerospace power. It examines how China selects between the options of "copying" foreign powers and "innovating" its own solutions to various operational military problems, as well as which areas China chooses to not compete in at all.

PLA's goal is to defeat, not merely compete

The research reported here was commissioned by the U.S. Air Force (USAF) and conducted by the Strategy and Doctrine Program within RAND Project AIR FORCE.