Understanding the extent to which drug prices are higher in the United States than in other countries is useful when developing and targeting policies to address both growth in drug spending and the financial impact of prescription drugs on consumers. This report provides findings related to international prescription drug price comparisons, noting that 2018 drug prices in the United States were substantially higher than those in other countries. 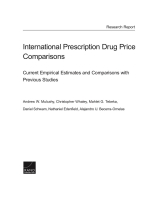 The United States spends more on prescription drugs on a per capita basis than most other countries do. Understanding the extent to which drug prices are higher in the United States than in other countries—after accounting for differences in the volume and mix of drugs—is useful when developing and targeting policies to address both growth in drug spending and the financial impact of prescription drugs on consumers. Although several prior studies systematically compare drug prices in the United States with those in other countries, the most recent of these studies used data that are almost a decade old. This report summarizes findings related to international prescription drug price comparisons presented in prior studies and presents new price comparisons that are based on 2018 data—both overall results and narrower analyses on specific categories of drugs, such as brand-name originator drugs, unbranded generic drugs, biologics, and nonbiologic drugs. The report also presents results from sensitivity analyses using different methodological steps and assumptions, such as prices and volume aggregated at different levels and volume weights calculated in different ways. The findings indicate that 2018 drug prices in the United States were substantially higher than those in each of 32 comparison countries when considering all drugs together. Compared with all comparison countries combined, U.S. prices were 256 percent of those in other countries. Prices remained substantially higher than prices in other countries—but with a smaller difference than in our main results—when we adjusted U.S. prices downward based on published estimates of the relative differences between manufacturer and net prices for drugs. U.S. prices for most subsets of drugs, and particularly brand-name originator drugs, were higher than those in comparison countries. The one exception was unbranded generic drugs, for which U.S. prices were on average 84 percent of those in other countries.

Policy discussion surrounding U.S. prescription drug prices focuses on whether prices in the United States are too high or appropriate relative to the benefits that they offer to patients

This research was funded by the U.S. Department of Health and Human Services Office and carried out within the Payment, Cost, and Coverage Program in RAND Health Care.