U.S. Army North led Department of Defense support to civilian disaster-response operations in the wake of hurricanes Irma and Maria in 2017. RAND was asked to answer a series of questions about that support, including about relationships among responding organizations and possible improvements in such things as speed of response and situational awareness. 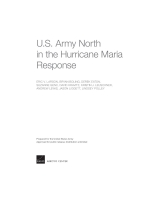 Hurricanes Irma and Maria in Puerto Rico and the U.S. Virgin Islands (USVI) in September 2017 sparked a whole-of-government response involving local, state, federal, civilian, and military responders. From late September through mid-November 2017, U.S. Army North (USARNORTH) was the joint force land component commander for Department of Defense (DoD) support to civilian disaster-response operations in the wake of the two hurricanes. USARNORTH directed RAND Arroyo Center to answer a series of questions about that support, ranging from how well the DoD response fit with the National Response Framework (NRF), doctrine, authorities, and templates to relationships among responding organizations to possible improvements in such things as speed of response and situational awareness (SA). While it is reasonably unlikely that both local and state response capabilities would simultaneously be incapacitated in future such incidents, Puerto Rico and USVI would still be relatively isolated, and a complex catastrophe could again present many of the same challenges. A strategic concept for defense support of civil authorities (DSCA) needs to center on policy decisions on the number, types, and sizes of overlapping incidents that will serve as pacing functions for determining future response capabilities and who will provide them.

This research was prepared for the United States Army and conducted by the Forces and Logistics Program within RAND Arroyo Center.