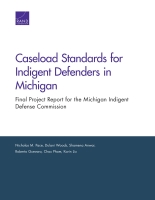 In 2017, the Michigan Indigent Defense Commission (MIDC) asked the RAND Corporation for assistance in determining maximum caseload standards for providers of indigent legal representation to adult defendants in the trial-level courts of the state of Michigan. Such standards are intended to act as one means — though certainly not the only one — of ensuring that indigent defenders will have sufficient time to effectively represent the clients whom they have been appointed to defend. Similar to previous studies in other states that have also addressed the question of reasonable caseloads, this project conducted three data collection efforts to provide the empirical foundation for the Michigan standards: an eight-week time study, a survey of criminal defense attorneys, and a September 2018 conference where experienced criminal defenders reviewed the previously collected data and recommended average time expenditures for counsel representing indigent defendants in various categories of criminal matters in Michigan trial courts. The authors present for the MIDC's consideration recommended caseload standards based on analysis of the collected data.

Attorney survey results showed defenders have widely varying access to resources, but all would recommend spending more time on cases

Based on the expert deliberations and the assumption of 1,856 case-related duty hours available annually per indigent defense attorney, the authors recommend these annual caseload maximums:

The research described in this report was prepared for the Michigan Indigent Defense Commission (MIDC) and conducted by the Justice Policy Program within RAND Social and Economic Well-Being.