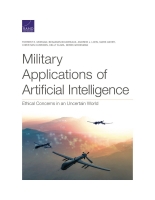 Ethical Concerns in an Uncertain World

The authors of this report examine military applications of artificial intelligence (AI) and consider the ethical implications. The authors survey the kinds of technologies broadly classified as AI, consider their potential benefits in military applications, and assess the ethical, operational, and strategic risks that these technologies entail. After comparing military AI development efforts in the United States, China, and Russia, the authors examine those states' policy positions regarding proposals to ban or regulate the development and employment of autonomous weapons, a military application of AI that arms control advocates find particularly troubling. Finding that potential adversaries are increasingly integrating AI into a range of military applications in pursuit of warfighting advantages, they recommend that the U.S. Air Force organize, train, and equip to prevail in a world in which military systems empowered by AI are prominent in all domains. Although efforts to ban autonomous weapons are unlikely to succeed, there is growing recognition among states that risks associated with military AI will require human operators to maintain positive control in its employment. Thus, the authors recommend that Air Force, Joint Staff, and other Department of Defense leaders work with the State Department to seek greater technical cooperation and policy alignment with allies and partners, while also exploring confidence-building and risk-reduction measures with China, Russia, and other states attempting to develop military AI. The research in this report was conducted in 2017 and 2018. The report was delivered to the sponsor in October 2018 and was approved for distribution in March 2020.

This research was commissioned by the United States Air Force and conducted within the Strategy and Doctrine Program of RAND Project AIR FORCE.