This report explores how the expected value of workers' compensation benefits interacts with the decision to settle a claim. The authors analyze the relationship between the expected value of benefits and the probability of settlement before and after a 2005 policy in Oregon that changed the value of permanent disability benefits. The findings do not show evidence that changes in potential benefit values result in strategic decisions to settle. 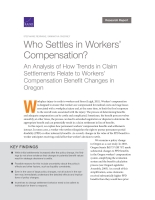 Who Settles in Workers' Compensation?

The process of determining appropriate workers' compensation benefits can be costly and complicated. In some cases, the process can lead to extended negotiation or disputes to determine the appropriate benefit and can potentially result in a claim settlement in lieu of benefits. In this report, the authors explore the ways that the expected value of permanent workers' compensation benefits and settlements interact. In some cases, a worker who settles relinquishes the right to pursue permanent partial disability (PPD) or other indemnity benefits. As a result, changes in the value of the PPD benefits that a worker anticipates that he or she might receive could affect the worker's decision to settle. The authors review the general law and economics literature on settlements and analyze a policy change in Oregon as a case study. In 2005, Oregon Senate Bill 757 (SB 757) made substantial changes to PPD benefits. This policy change resulted in some claimants receiving substantially larger PPD benefits than they would have received prior to the policy change and in others receiving substantially smaller benefits. The authors examine the relationship between the expected value of the benefit and the probability of settlement before and after the policy change to explore whether these changes in permanent disability benefits affected workers' decisions to settle the claim. The findings do not show evidence that changes in potential benefit values result in strategic decisions to settle a claim.

Workers and employers have different incentives to pursue a settlement

Possible reasons for the lack of significant alterations in behavior include uncertainty about the changes' effects and other, unrelated factors

This project is a RAND Venture. Funding was provided by gifts from RAND supporters and income from operations. The research was conducted by the RAND Institute for Civil Justice within RAND Social and Economic Well-Being.