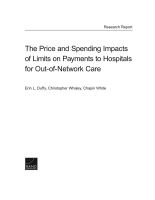 A bipartisan consensus has emerged around the need to address "surprise medical bills," and policymakers have shown a growing interest in using out-of-network payment limits as a tool to control rising health care spending in the United States. Such policies cap the total amount that hospitals and physicians can be paid when they are not in network and prohibit providers from billing patients for an excess balance. Medicare Advantage currently limits payments to out-of-network providers at traditional Medicare payment rates, and the state of Oregon has recently enacted an out-of-network payment limit for its public employee insurance plans. In addition, limits on out-of-network payments to hospitals have been proposed by U.S. senators and 2020 presidential candidates. However, there is a lack of information about the potential impacts of applying such payment limits broadly to hospital services. This lack of information is complicated by the nuanced role that out-of-network limits play in the negotiation process for in-network prices. To fill this gap, RAND researchers estimated the effects that four proposed out-of-network payment limits for hospital care—125 percent of Medicare payments (a strict limit), 200 percent of Medicare payments (a moderate limit), state average payment by private plans (a moderate limit), and 80 percent of average billed charges (a loose limit)⁠—would have on negotiated in-network prices and total payments for hospital care. These four scenarios reflect the variation in base measure (traditional Medicare, market price, and charges) and payment generosity among existing policy proposals.

Strict out-of-network payment limits on hospital care could yield savings similar to more-sweeping proposals, such as Medicare for All, rate setting, and global budgets