This report develops a general concept for training military forces in employment of unmanned aircraft systems and a framework for addressing training requirements and discusses the limits of existing infrastructure in supporting UAS training. 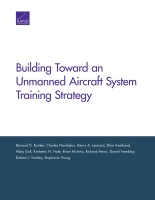 Unmanned aircraft systems (UASs) have become increasingly prevalent in and important to U.S. military operations. Initially serving only as reconnaissance or intelligence platforms, they now carry out such other missions as attacking enemy forces. The swift expansion in their numbers and in the demand for their employment has, however, significantly increased demands on logistics and training systems. The challenge is not simply training system operators but also training operational forces and their commanders to integrate the systems into combat operations. Much of that aspect of training has thus far happened as units employ the systems in actual operations — essentially, on-the-job training. UAS training, particularly for the employment of UASs, now needs to be integrated more formally and cost-effectively into service and joint training programs. This report develops a general concept for training military forces in employment of UASs and a framework for addressing the training requirements and discusses the limits of existing infrastructure in supporting UAS training. Interoperability among services is another issue, because services have thus far mainly developed training suitable for their own needs. But the services have established a set of multiservice tactics, techniques, and procedures for UASs, which should facilitate interoperability training. At present, units are not always ready for joint training, so the focus should be on improving training at the unit level in the employment of UAS capabilities, with the overall guiding principle being to "train as we fight."

Each Service Needs to Resolve its Own Training Problems First

Range and Beddown Space is an Issue

Simulators Should Not Be a Priority at this Time

This research was sponsored by the OUSD (P&R), Directorate for Training and Readiness Policy and Programs, in coordination with the Joint Forces Command's Joint Warfighting Center and the Joint Unmanned Aircraft Systems Center of Excellence. The research was conducted within the Forces and Resources Policy Center of the RAND National Defense Research Institute (NDRI), a federally funded research and development center sponsored by the Office of the Secretary of Defense, the Joint Staff, the Unified Combatant Commands, the Navy, the Marine Corps, the defense agencies and the Defense Intelligence Community.