Armed drones are making the headlines, especially in their role in targeted killings. RAND researchers examined whether these weapons are transformative, how dangerous their proliferation will be, and whether U.S. use of them can shape a broader set of international norms that discourage their misuse by others. 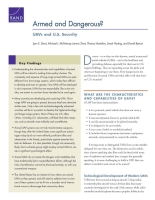 Armed drones are making the headlines, especially in their role in targeted killings. In this report, RAND researchers stepped back and asked whether these weapons are transformative. The answer is no, though they offer significant capabilities to their users, especially in counterterrorism operations as has been the case for the United States. Will they proliferate? Yes, but upon a closer look at the types of systems, only a few rich countries will be in a position to develop the higher technology and longer range systems. U.S. adversaries and others will likely find weapons such as aircraft and air defenses more cost and militarily effective. Their proliferation will not create the kinds of global dangers that call for new arms control efforts, but the risks to regional stability cannot be dismissed entirely, as is the case of any conventional weapon. How the United States will use these weapons today and into the future will be important in shaping a broader set of international norms that discourage their misuse by others.

Armed UAVs Are Not Truly Transformative