This report describes a comparative analysis of three proposals to allow Americans to keep their existing health plans under the Affordable Care Act (ACA). The proposals are evaluated based on their potential impact on the ACA-compliant market and the cost and coverage of health insurance. The possibility of each proposal causing a "death spiral" in the ACA-compliant market is also addressed. 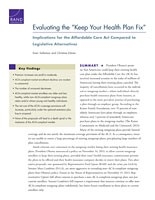 Implications for the Affordable Care Act Compared to Legislative Alternatives

President Obama's promise that Americans could keep their existing health care plans under the Affordable Care Act (ACA) has received increased scrutiny in the wake of millions of Americans having their plans cancelled. These cancellations primarily occurred in the individual or nongroup market, where individuals purchase health care plans directly from an insurer instead of through an employer. Many such plans do not meet the minimum coverage requirements of the ACA, leading insurers to send plan-cancellation notices to their enrollees.

This report describes a comparative analysis of three proposals to remedy the situation: one by the White House, another by Senator Mary Landrieu (D-LA), and a third by Representative Fred Upton (R-MI). The proposals are evaluated based on their potential impact on the ACA-compliant market and the cost and coverage of health insurance. The possibility of each proposal causing a "death spiral," in which rising premiums and decreasing enrollment undermine the viability of the ACA-compliant market, is also addressed.

The authors find that the three proposals vary from slight to moderate impact on ACA premiums, enrollment, and federal spending, but none of them would result in the unraveling of the ACA-compliant market.

Premium increases are small to moderate

The number of uninsured decreases

The net cost of the ACA's coverage provisions will increase, particularly under the optional extension plus buy-in proposal

None of the proposals will lead to a death spiral or the implosion of the ACA-compliant market.

Support for this report and for RAND Health's Comprehensive Assessment of Reform Efforts (COMPARE) initiative is provided by RAND's corporate endowment and through contributions from individual donors, corporations, foundations, and other organizations. This work was also supported in part by an internal investment from RAND Health, a division of the RAND Corporation.