The Substance Abuse and Mental Health Services Administration (SAMHSA), Center for Substance Abuse Treatment (CSAT), awarded grants to community organizations to expand and/or enhance reentry services to young offenders with substance use disorders on release. This report evaluates the Substance Use Treatment and Reentry (STAR) Program of Homeboy Industries, Inc., in collaboration with Behavioral Health Services, Inc., and the RAND Corporation. 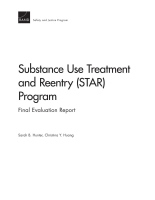 Substance use disorders are common among juvenile justice populations, and few resources exist to address this problem as young offenders transition into the community upon release. To address this need, in October 2010, the Substance Abuse and Mental Health Services Administration (SAMHSA), Center for Substance Abuse Treatment (CSAT), awarded three-year grants to community-based organizations to expand and/or enhance substance abuse treatment and recovery and reentry services to sentenced offenders returning to the community. Homeboy Industries, Inc., in collaboration with Behavioral Health Services, Inc., and the RAND Corporation, was awarded a grant to serve up to 220 16–25-year-olds recently released from juvenile detention to receive substance use treatment and recovery services at Homeboy Industries in downtown Los Angeles. This report represents the evaluation of that Substance Use Treatment and Reentry (STAR) Program. Ninety-four percent of the proposed population was enrolled into the program. Ninety percent of participants received at least one substance use treatment session, and 73 percent successfully completed the five-session treatment in six months. Analysis of the client outcome data following participation showed improvements or stability over time in housing and social connectedness. Over 70 percent of participants who completed a 12-month interview reported continued employment, and self-reported arrests were below 15 percent. Abstinence rates did not change much throughout the project (about 30 percent); however, those reporting use at intake showed reductions in use over time. These findings reveal a continued need among the population for substance use treatment and recovery support.

The STAR Program improved or stabilized housing and social connectedness

The STAR Program reduced substance abuse among those using at intake

The research described in this report was sponsored by Homeboy Industries and the Center for Substance Abuse Treatment, Substance Abuse and Mental Health Services Administration, and was conducted in the Safety and Justice Program within RAND Justice, Infrastructure, and Environment.