Community courts aim to improve outcomes by addressing factors linked to criminal behavior with access to treatment and services, and by emphasizing ties to a specific neighborhood. In 2009, San Francisco opened the Community Justice Center (CJC), a community court serving a traditionally high-crime area. This report examines whether the CJC reduces the risk of rearrest when compared to more traditional approaches for addressing arrestees. 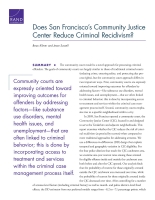 In 2009, San Francisco opened a community court, the Community Justice Center (CJC), to serve the Tenderloin and adjacent neighborhoods, a traditionally high-crime area. Community courts are expressly oriented toward improving outcomes for offenders by addressing factors often linked to criminal behavior (by incorporating access to treatment and services within the criminal case management process); they also emphasize ties to a specific neighborhood. This report examines whether the CJC reduces the risk of rearrest when compared to more traditional approaches for addressing arrestees.

Using a differences-in-differences (DD) design that exploits temporal and geographic variation in CJC eligibility, a RAND research team examined one-year rearrest rates among those arrested for eligible offenses within the four police districts that include a part of the CJC catchment area, including offenses inside and outside the catchment area both before and after the CJC opened. After controlling for a number of arrestee-level factors (including criminal history), as well as month- and police district–level fixed effects, the DD estimator from our preferred models ranges from –8.2 to –7.1 percentage points, which corresponds to an 8.9 percent to 10.3 percent reduction in the probability of being rearrested within one year. These findings support the hypothesis that the CJC reduces criminal recidivism and are robust to a number of sensitivity analyses.

The research reported here was conducted in the Safety and Justice Program, a part of RAND Justice, Infrastructure, and Environment, a division of the RAND Corporation.