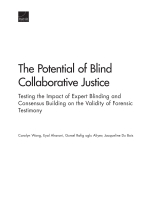 The Potential of Blind Collaborative Justice

Biased expert testimony is a leading cause of wrongful convictions, and new techniques are needed to reduce such biases. This study conducted an experimental investigation of two potential contributors to biased testimony within adversarial litigation involving forensic evidence: (1) experts' knowledge of their party representation (i.e., prosecution vs. defense counsel), and (2) lack of input from the relevant scientific community. A sample of 580 scientists was asked to read a vignette about a hypothetical criminal case and solve a statistical reasoning problem bearing on the case evidence. Participants were randomly assigned to one of three types of party representation (prosecution, defense, or blinded). Approximately half the participants in each representation were given the correct solution in advance of their responses, The correct solution was derived by an independent panel of 12 experts, and presented as "consensus feedback." The other half of participants in each representation received the consensus feedback after providing an initial response, and received an opportunity to change their initial response following that feedback. We found no evidence of an effect of blinding on accuracy. The results revealed a consistent, positive effect of expert consensus feedback on response accuracy. We conclude that expert consensus feedback could improve the validity of expert testimony, and discuss the importance of educating scientists about ways to reduce testimonial bias.

An Advantage Due to Blinding Was Not Observed

The research reported here was conducted in the RAND Safety and Justice Program, a part of RAND Justice, Infrastructure, and Environment.