Because special warfare works principally through local actors, employs political warfare methods, and requires the integration of a much broader suite of U.S. government agency capabilities than are envisioned in conventional campaigns, the U.S. must adjust its conceptual models for military campaigns to achieve its goals through special warfare. In this report, RAND authors analyze special warfare's characteristics, advantages, and risks. 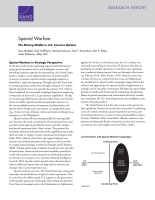 This report demonstrates the need for special warfare, a strategic and operational approach to securing U.S. interests. The U.S. requires new approaches for exerting influence to fill the missing middle between the costly indefinite commitment of conventional forces and the limitations of distant-strike options presented by drones and Tomahawk missiles. Because special warfare works principally through local actors, employs political warfare methods, and requires the integration of a much broader suite of U.S. government agency capabilities than are typically envisioned in conventional campaigns, the United States must adjust its conceptual models for military campaigns to achieve its goals through special warfare.The report has four specific aims: (1) to adapt conventional operational art to the unique characteristics of special warfare, (2) to identify the strategic advantages and risks associated with special warfare, (3) to explore how special warfare campaigns could be used to address challenges identified in strategic guidance, and (4) to provide guidance to military and civilian leaders and planners in designing and executing these campaigns.RAND authors recommend that DoD strengthen its special warfare planning capacity and culture, conduct institutional reforms to facilitate unified action among relevant U.S. government agencies, and place greater emphasis on developing capabilities required to prevail in the human domain.

This report is based on a project sponsored by LTG Charles T. Cleveland, commanding general of U.S. Army Special Operations Command. The research was conducted within RAND Arroyo Center's Strategy and Resources Program. RAND Arroyo Center, part of the RAND Corporation, is a federally funded research and development center sponsored by the United States Army.