In 2013, the United States opted to cancel Phase 4 of its European Phased Adaptive Approach missile defense system. Russia had cited it as a threat to its nuclear deterrent. This report demonstrates that the restructured U.S. system is able to defend against a range of current and future Iranian missile threats and does not pose a threat to Russian intercontinental ballistic missiles. 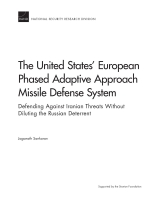 Defending Against Iranian Missile Threats Without Diluting the Russian Deterrent

The United States developed the European Phased Adaptive Approach (EPAA) missile defense system to defend against a variety of current and future Iranian missile threats. Russia has expressed dissatisfaction with the system, protesting that it presented a significant threat to Russia's nuclear deterrent. U.S. officials have repeatedly stated that the EPAA does not pose a threat to Russia's missile forces, arguing that the system is designed for ballistic missile threats from outside the Euro-Atlantic area and can neither negate nor undermine Russia's strategic deterrent capabilities. Nevertheless, in 2013, the Obama administration canceled Phase 4 of the system. This report demonstrates that the restructured EPAA system is able to defend against a range of current and future Iranian missile threats and does not pose a threat to Russian intercontinental ballistic missiles. Canceling Phase 4 of the EPAA system has opened a window for the United States and Russia to come together on additional bilateral nuclear arms reduction measures and missile defense cooperation.