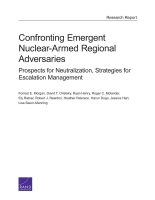 Risks are increasing that the United States will find itself in confrontations with nuclear-armed regional adversaries — that is, hostile states with small nuclear arsenals. This research seeks to help the U.S. Air Force understand and prepare for such confrontations. The authors explore circumstances in which the United States might be able to neutralize a regional opponent's nuclear capabilities, and describe how and in what circumstances the United States can manage escalation while defeating nuclear-armed opponents in conventional conflict.

The analysis finds that there is probably no case in which U.S. forces could neutralize an opponent's nuclear capabilities with a high enough probability of success that U.S. leaders would let them attempt it. However, U.S. forces should be able to manage escalation in some conventional conflicts, as long as the United States does not threaten the survival of the enemy regime or its nuclear deterrent forces. U.S. leaders must deter the adversary from escalating above critical U.S. thresholds and manage U.S. forces to avoid inadvertent and accidental escalation.

The authors recommend that the Air Force continue research and development on methods and capabilities to find, fix, track, target, and assess enemy nuclear weapons capabilities; continue research and development on ballistic and cruise missile defenses; and conduct research on how to rebalance the force to better enable posturing airpower to conduct conventional strike operations from afar, in order to defeat a nuclear-armed regional adversary's conventional forces while operating from bases beyond the range of its conventional and nuclear strike capabilities.

Can the United States Neutralize a Regional Opponent's Nuclear Capabilities?

The research described here was commissioned by AF/A3/5 and AF/A8 and conducted within the Strategy and Doctrine Program of RAND Project AIR FORCE.