Development of the F-35 Joint Strike Fighter was shared by the United States (for the U.S. Air Force, Navy, and Marine Corps), Australia, Canada, Denmark, Italy, the Netherlands, Norway, Turkey, and the United Kingdom. In 2012, these countries agreed to manage F-35 sustainment assets as a global pool. This report reviews other international military aircraft spares pooling programs from the 1950s to the present to identify lessons learned. 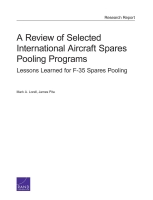 by Mark A. Lorell, James Pita

The F-35 Joint Strike Fighter is a fifth-generation stealth fighter whose system development was shared by nine countries: the United States (for which the F-35 is being jointly procured by the U.S. Air Force, U.S. Navy, and U.S. Marine Corps), Australia, Canada, Denmark, Italy, the Netherlands, Norway, Turkey, and the United Kingdom. In 2012, these countries agreed that F-35 sustainment assets would be managed as a single global pool, which would be centrally managed by the F-35 production support manager. In the formal agreement establishing this pool, language was also included to allow participants to opt out of the global pool, should a nation desire to establish (and be willing to pay for) a separate stock of assets. This report reviews other selected historical and current international military aircraft spares pooling programs involving the United States, major European North Atlantic Treaty Organization allies, and other U.S. allies to identify lessons learned. The most successful historical programs were characterized by a single dominant partner that could establish the ground rules and resource allocation priorities, as well as control configuration. At the same time, successful programs made major efforts to ensure fairness, equality, and transparency for all partners, based on relative contribution and need.

This research was conducted within the Resource Management Program within RAND Project AIR FORCE.