Air base defense and attack has been the subject of sustained research and analysis at the RAND Corporation for most of its history. This report provides an overview of RAND's work in this area from 1951 through 2020, describes RAND's contributions (both in substance and analytical methods), and identifies enduring insights for improving the resiliency of U.S. air bases in the face of modern threats. 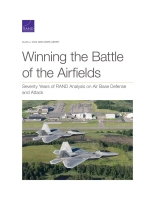 Winning the Battle of the Airfields

Seventy Years of RAND Analysis on Air Base Defense and Attack

From the dawn of the air power age to today, airfields have been recognized as essential military facilities, and combatants have gone to great lengths to destroy enemy aircraft on the ground (where they are most vulnerable) and to deny the use of airfields through attacks on runways, fuel storage, and other supporting assets.

The RAND Corporation has worked on issues related to analyzing air base defense and attack (ABD/A) for 70 years — supporting the analysis of its U.S. Department of Defense (DoD) and U.S. Air Force (USAF) sponsors and sometimes leading the way. This report documents and highlights RAND's many contributions to the analysis of ABD/A over time and identifies enduring insights for improving the resiliency of U.S. air bases in the face of modern threats.

RAND has made far-reaching contributions to the resiliency of U.S. air power, and sometimes led the way

The research described in this report was prepared for the Department of the Air Force and conducted within RAND Project AIR FORCE.