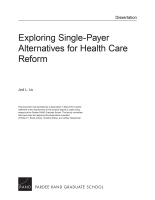 The Affordable Care Act (ACA) has reduced the number of uninsured and established new cost containment initiatives. However, interest in more comprehensive health care reform such as a single-payer system has persisted. Definitions of single-payer systems are heterogeneous, and estimates of the effects on spending vary. The objectives of this dissertation were to understand single-payer proposals and to estimate health care spending under single-payer alternatives in the United States.

Single-payer proposals are wide-ranging reform efforts spanning financing and delivery, but vary in the provisions. I modeled two sets of national scenarios — one labeled comprehensive and the other catastrophic — and compared insurance coverage and spending relative to the ACA in 2017. First, I estimated the effects of utilization and financing changes, and then I added the effects of "other savings and costs" relating to administration, drug and provider prices, and implementation.

I also developed an interactive, web-based cost tool that allows the savings and cost assumptions to be adjusted by any user. As the debate on how to finance health care for all Americans continues, this study provides increased transparency about economic evaluations of health care reform.

This document was submitted as a dissertation in May 2016 in partial fulfillment of the requirements of the doctoral degree in public policy analysis at the Pardee RAND Graduate School. The faculty committee that supervised and approved the dissertation consisted of Robert H. Brook (Chair), Christine Eibner, and Jeffrey Wasserman.